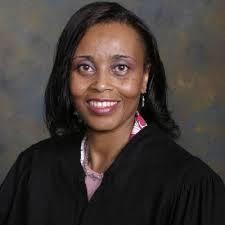 The hereby undersigned demand that Judge Esther L. Wiggins be removed from her position as district court judge of the 17th Judicial District in the state of Virginia. Judge Wiggins has proven inside and outside the courtroom to not have judiciary character and has not upheld the canons of judicial conduct.
We respectfully direct our grievances to the Virginia Legislature—the only organism in power to carry out such procedure and wish to let it be known that Judge Esther L. Wiggins:
A. Violates Canon 3 of Virginia judiciary conduct by allowing bias and prejudice to influence her decisions in the courtroom.
B. Carries out proceedings and reaches verdicts without admitting important evidence that may influence the case.
C. Does not uphold the well being of the family as a priority and abuses her power by stripping parents from seeing their children causing great grievance and suffering.
D. Is not competent in her functions. The judge does not operate in an impartial manner to the detriment of children and families who suffer the consequences of her actions.
This petition is presented by several parents who have lost custody of their children due to Judge Esther L. Wiggins’ ineptitude and lack of judicial character. It is also important to note that this is not an isolated case, but rather a pattern of consistent bias and abuse of power as is clearly demonstrated by the cases of:
• Benita Washington, (mother of Moses) Moses was taken from his family after suffering an asthma attack. Esther Wiggins refused to consider awarding temporary custody to Ms. Washington’s family. The child was promptly given up for adoption.
• Hey, Nancy and husband Slitor, Kit (parents of Sabrina) Sabrina was given away to a politically connected couple in Arlington Virginia. The removal was based on a disability Nancy Hey suffers from;a very mild and functional level of autism.In the judicial opinion, Esther Wiggins focused on trivial reasons for giving away Mrs. Hey’s daughter. The community is concerned that any parent suffering from Asperger’s Syndrome or any other disorder can easily lose custody of their child.
• Dr King, Ariel (mother of Arianna Lelani) Arianna’s case has been taken by the United Nations Human Rights Council and the German Embassy. This child contracted a rare blood disorder and shows signs of sexual abuse. Judge Esther Wiggins insisted on taking jurisdiction over the child even though the child lived in Virginia less than one month.
• Naomi L. P. (mother of C) After Esther Wiggins awarded sole custody to the father, Eric Krempp who then sent C. to France and abandoned the child for nearly six years with his mother. The last time Naomi saw her daughter, the child was unable to speak English. The mother was forced to pay thousands of dollars in child support to a man who did not have custody of his child. Virginia child support enforcement neglected to send all that money to the French government to reimburse them for all their expenses for the child.
Other women affected by Esther Wiggins are: Robinson, Carla; Byrd, Tylane and several other parents who wish to be represented on this petition, but remain anonymous out of fear of reprisal. Parents have expressed many concerns that Judge Wiggins does not notify all parties that there is not a court reporter present. Parents discover this court does not have court reporters until after the fact, thus failing to maintain any record of what takes place in the courtroom.
Any time a Court conducts its proceedings in secret, without the constant surveillance of a court reporter, the community naturally looks upon the Court with an eye of suspicion. The undersigned petitioners feel that all proceedings should be recorded at all times. Secret trials and hearings do not belong in modern, civilized society.
Parents claim that Judge Wiggins ignores important evidence, lies, and has inappropriate ex parte communication with parents and attorneys. Parents have reported that attorneys will visit Judge Wiggins privately in her chambers, and ask her for favors. This is evident in the overly friendly relationship she displays with attorneys in her courtroom. Esther Wiggins has also been accused of meeting parents outside the court room. In 2000, Eric Krempp claimed that Esther Wiggins was socializing with him at his restaurant, Les Halles, in Washington DC. Parents also report Esther Wiggins has had court orders written before attorneys even finished their closing arguments. Her rulings harm Virginia’s relationship with foreign governments. The country of Germany is deeply concerned about the welfare of Arianna Lelani while France is less than pleased that they paid tens of thousands of Euros for Celine while the biological father collected a hefty child support check for a little girl who never lived with him. This undermines the integrity of The Hague Convention Civil Aspects of International Child Abduction and Retention between the United States and all ratifying countries.
In conclusion, the hereby undersigned request that the Virginia State Legislature do a great moral service to the State of Virginia, children and parents by removing and not reappointing Judge Esther Lyles Wiggins. To date, Judge Esther L. Wiggins has diminished public confidence in the judiciary system and undermined the integrity of the entire system of government. No Virginia judge is above the law or the codes of ethical conduct laid out clearly the Virginia State Canons of Judicial Conduct. The people of Virginia deserve to have honest, responsible and impartial judges in their courtrooms for the benefit of fairness, equality and to preserve the rule of law. Sincerely, The undersigned

Ms. Naomi P»rrish. http://www.gofundme.com/xglh0 You may contact me by email. I am the mother of one of the victims. My daughter was abandoned by her father in France for nearly six (6) years. due to Esther Wiggins incompetence and stupidity. To read my story, go to this link: http://my.nowpublic.com/world/esther-wiggins-lyles-trip-alice-wonderland You may contact me on Facebook or at the following e-mail: seattlesoapcompany@yahoo.com https://www.facebook.com/SeaSoapCompany I reside between Mexico City and Seattle Washington. I am the owner of Seattle Soap Company.