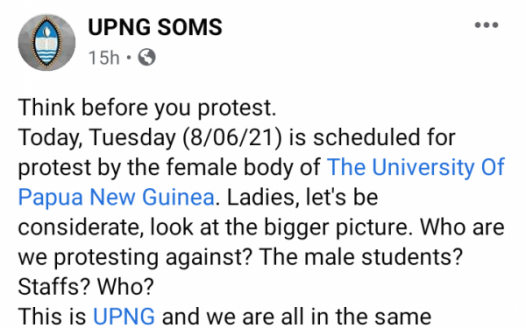 This petition is addressed to the administration and department heads of the University of Papua New Guinea (UPNG) with regards to a Facebook page namely UPNG SOMS posting an inappropriate post that has left a bad taste in the mouths of Papua New Guineans.

With the recent sexual harassment/assault allegations brought forward by numerous female students of the University of Papua New Guinea which have been shared on Facebook, it is a community effort to address this issue and to resolve it. The female folk of UPNG banded together to protest on Tuesday (08.06.21) on campus however, criticism from a large Facebook page i.e UPNG SOMS (4,678 followers) had heavily condemned their protest in a manner that is threatening and disregards the equal right for women to voice their issues in a democratic country. The Facebook page UPNG SOMS has branded the University of Papua New Guinea as a misogynistic environment that does not care about the safety of their female students. This Facebook page and group have caused more than 580 people to comment against their inconsiderate post regarding the protest. Their post not only sheds a damaging light on the integrity of UPNG but, it also brands your male students in a bad manner. We ask that you ban this page from using the university's name as well as any groups in your university associated with that name(i.e UPNG SOMS/ SOMS) because as a society, what that page has posted does not respect our constitution, our people, and our university.

We also ask that the University of Papua New Guinea look into the policies needed for the formation of student groups and clubs created under the university. This petition is also a call to the university to address the issues of SOMS students so we understand why their post had been created.