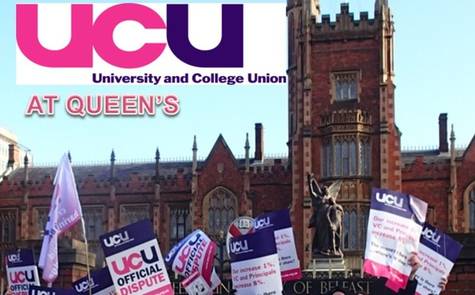 Remove threat of “Withholding of salary” for Professors at Queen's.

The triennial Professorial salary review at Queen’s University Belfast was recently announced for 2015. A determination by management to link this to the capability procedure alongside the threat of "Withholding of salary" has been included without warning. In reality this means that any subsequent cost of living awards may be withheld and this sets a serious precedent. The introduction of new so called “Academic Standards” at the same time has set crude income targets for staff at all levels including Professors. These standards are being introduced in retrospect and have received considerable criticism*.

This means that entirely new expectations of performance since the last Professorial salary review have been introduced at the last minute. This demand is obviously unreasonable and “opens the door” for similar treatment of all staff in the coming year. UCU has not agreed with the management proposals.

Recently it was reported that about 80% of UCU members in Birmingham University would take industrial action over similar expectations on external income demands being proposed there (see: https://www.timeshighereducation.co.uk/news/birmin...

We therefore ask all Professors to support the petition:

"We ask management to rethink the Professorial salary review, withdraw the clause “Withholding of salary” and enter into a meaningful consultation with staff on the Academic Standards being imposed."

If you chose the option of not putting your signature on the petition list you will remain anonymous and UCU will not divulge your name.