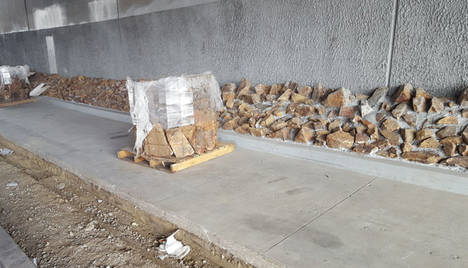 Remove the anti-homeless 'rock garden' under the San Diego freeway

In April 2016 the city of San Diego installed a ‘rock garden’ under the I-5 overpass on Imperial Avenue in Sherman Heights to deter homeless residents from staying there. The city council members who lead this neighborhood were not even aware of this $57,000 project that was carried out behind their backs and without their approval.

We concerned citizens of San Diego reject the installment of this pile of rocks, as it is dangerous, wasteful, ugly, and inhumane. We the people are calling for the immediate removal of the rocks.

The complaint that hailed the rock pile was that the underpass was unsafe to pedestrians, but now if someone falls on the sidewalk they will be met by sharp jagged rocks, and the city will be held liable for the unnecessary injury. Wheelchairs and walkers cannot even get through, which is a total affront to our disabled veterans and elderly citizens, who also make up a large percentage of our homeless population. Calling this pile of rocks a ‘garden’ makes the useless monstrosity less unsightly only in name; we may as well just paint over potholes and call it street art.

Our city is in the midst of a human rights crisis that needs both immediate and long-term solutions, not hazardous reactionary measures. Even though efforts to ‘end homelessness’ in San Diego have been touted in recent years, there are nearly 1,000 more people sleeping without shelter now than there were just 2 years ago. We appreciate that some city leaders have fought against the establishment for more funding and more services, but it simply isn’t enough. Affordable housing has steadily depleted in favor of high-rise developments and tourist attractions, grotesquely expensive public restrooms are erected only to be removed a year later, and the support provided by some local shelters suffers so much that many people feel safer sleeping on the street than in these places. It is tragic that our neighbors’ options for basic shelter have become so meager, especially in a city as rich as ours. Instead of instituting offensive ‘pest control’ measures like the rock pile, funding and efforts should be focused on actually serving the needs of our most vulnerable population of men, women, and children.

Rocks don’t make poor people disappear. A $60,000 wall of rocks and cement will not stem the rising tides of poverty and abject inequality, and uprooting families daily to make them move from street to street only ensures that homelessness spreads to every corner of our community.

Please support your neighbors by signing this petition to remove the rock pile, and encourage our leaders to pursue methods of solving homelessness that are effective and safe instead.