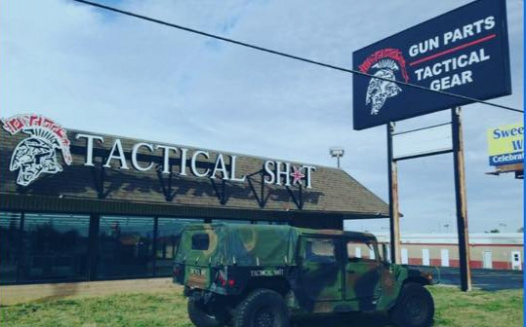 I’m from Saint Louis MO.This is the sad reality of what has been going on in my hometown and around the country for a LONG time. The people we have to live side by side with and the businesses that are allowed to operate. There is a DISGUSTINGLY racist and offensive gun supply store called Tactical Sht in our area and it has been gaining popularity. It is 20 minutes outside of St. Louis City. They clearly profit off fear and bigotry. They have been posting on their Facebook page about the Stockly verdict and the protesters in our city. Their content is doing nothing but firing a flame and is very concerning considering they sell SERIOUS firearm equipment. They sell “grab them by the p*ssy” badges. They have called muslim women jihads including a peaceful protester who police threw milk on. They were banned from speaking on a local radio station for being opposed to the BLM movement. They have mocked trans people serving in the military. SOMETHING HAS to be done. Here is their shop number (636) 244-3424 for anyone who is willing to call. Also you can contact the mayor of St .Peters Len Pagano where they are located and let him know that businesses that promote hatred and intolerance have no place in our communities PLEASE SIGN AND SHARE TO SPREAD AWARENESS