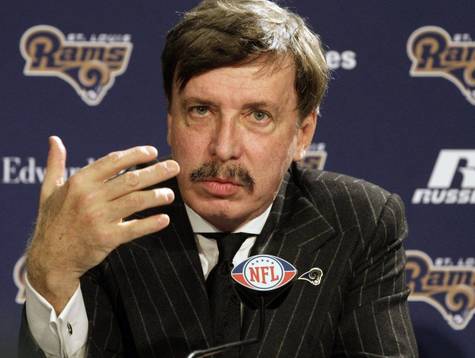 Remove Stan Kroenke from the Missouri Sports Hall of Fame

Enos Stanley Kroenke is a businessman born in Columbia, Missouri. He was a big factor in getting the Rams to St. Louis in 1995. He said that St. Louis "is a great football market." Then in 2010 he said he would do "everything in his power to keep the Rams in St. Louis." Then now in 2016, in his 29-page proposal to move the Rams to Los Angeles, Kroenke completely berated and trashed the city of St. Louis.

Kroenke was elected into the Missouri Sports Hall of Fame back in 2009 for his efforts in bringing the Rams to St. Louis. His page on the Missouri Sports Hall of Fame says "A native of Mora, MO, Stan Kroenke was instrumental in bringing the NFL’s Los Angeles Rams to St. Louis. In addition to St. Louis, his love of sports has energized many communities including Denver, where he is the owner of NBA’s Denver Nuggets and the NHL’s Colorado Avalanche. Kroenke has continued to grow his sports empire with the purchases of the National Lacrosse League’s Colorado Mammoth and Major League Soccer’s Colorado Rapids. In 2002, he partnered with football legend and Denver Broncos owner Pat Bowlen to become co-owner of the Arena Football League’s Colorado Crush."

Kroenke has completely turned his back on the city of St. Louis and such aforementioned actions should call for him to be removed from the Missouri Sports Hall of Fame.