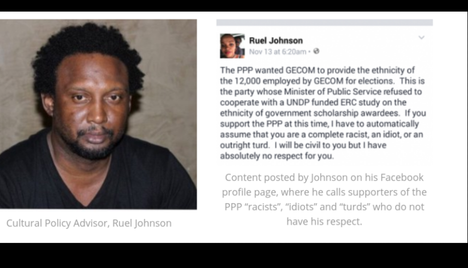 Ruel Johnson engages in fierce political activism against the largest political party in Guyana, the Peoples Progressive Party Civic (PPP/C). Under the recently installed APNU/AFC Government, he was granted a position as Cultural Policy Advisor to Education Minister Rupert Roopnarine.

However, Johnson in his position as an advisor and a public officer, continued to insult the PPP/C and its electorate through virulent posts on his public profile on Facebook. While it is his right to express himself freely, Ruel Johnson has violated his Constitutional obligation as a public servant to respect the diversity of the people he serves, and as such has violated the people's Constitutional right to be protected from discrimination in all its forms.

On November 13 at 6:20 am, in an attack launched against the supporters of the PPP/C, who represent 49% of the electorate in Guyana, surpassing that of the APNU (a combination of 6 political parties) and of the AFC, Ruel Johnson declared that "if you support the PPP at this time, I have to automatically assume that you are a complete racist, an idiot, or an outright turd. I will be civil to you but I have absolutely no respect for you."

On the basis of the following points, the supporters of the largest electoral base of Guyana demand the removal or resignation of Ruel Johnson:

1. Article 9 of the Constitution of Guyana which states that "Sovereignty belongs to the people, who exercise it through their representatives and the democratic organs established by or under this Constitution".

Ruel Johnson therefore, being a part of our democratic institutions, has violated the sovereignty of the people.

2. Article 149 of the Constitution, in particular (b): "No person shall be treated in any discriminatory manner by any person acting by virtue of any written law or in the performance of the functions of any public office or any public authority."

Ruel Johnson therefore has violated his legal obligations as a public officer and discriminated against the PPP/C electorate on the basis of their political persuasion.

3. The people who Ruel Johnson discriminates against contribute as taxpayers to the funding of his salaries and benefits.

Ruel Johnson therefore has violated his moral and legal obligation to respect their political opinion.

4. Ruel Johnson through the ethnic undertones in his public remarks is not believed to be ethnically impartial as is required in his position as Cultural Policy Advisor to the Education Ministry.

5. Ruel Johnson's contribution to Carifesta XII 2015, as a sitting member on the Carifesta Guyana Committee, requires clarification. This year's respresentation of Guyana at Carifesta failed to promote the cultural diversity of the population, as compared to previous years.

6. Ruel Johnson openly attacks and insults the democratically elected leaders of the PPP/C, and as such insults the people who have elected them.

On the basis of the aforementioned points, and in respect for the largest electorate of this country, we, the supporters of the PPP/C and the people who uphold the values of Guyana's Constitution, have concluded that Ruel Johnson is unsuitable and unfit to represent our interests.

We therefore call on Education Minister Rupert Roopnarine, for the immediate removal of Ruel Johnson from his position as Cultural Policy Advisor and the appointment of someone who will represent us impartially regardless of our political persuation and ethnic origins.