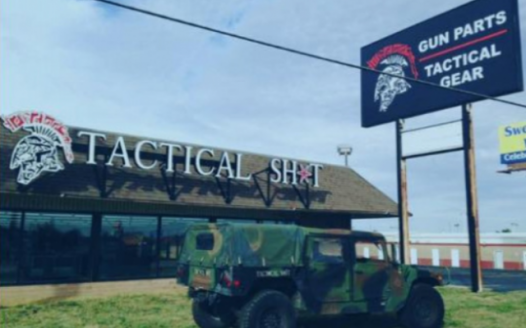 I’m from Camdenton MO. This is the sad reality of what has been going on in my hometown and around the country for a LONG time. The people we have to live side by side with and the businesses that are allowed to operate. There is a DISGUSTINGLY butthurt and self entitled group of people protesting against a gun supply store called Tactical Shit in our area and it has been gaining popularity. It is 20 minutes outside of St. Louis City. They clearly profit off sales and customer service. They have been posting on their Facebook page about the Stockly verdict and the protesters in our city. Their content is doing nothing but raising awareness and is very influential considering they sell normal firearm equipment to those that meet the qualifications. They sell “grab them by the pussy” badges, and it's hilarious. They have called muslim women jihads including a peaceful protester who police threw milk on because war has proven that terrorist organizations don't just consist of males. They were banned from speaking on a local radio station for being opposed to the BLM movement and rightfully so because BLM is leading a cause for all the wrong reasons. They have never mocked trans people serving in the military, but raised awareness on the issue of using taxpayers' money to complete these transitions. SOMETHING HAS to be done. Get that stupid asterisk off their sign and show us what freedom of speech is all about! Also you can contact the mayor of St .Peters Len Pagano where they are located and let him know that businesses that promote local revenue and community involvement have a place in our communities. PLEASE SIGN AND SHARE TO SPREAD AWARENESS