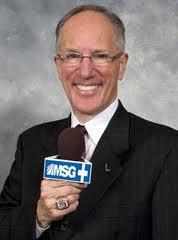 This is a petition to remove Mike "Doc" Emrick from calling any NHL hockey games on NBC Sports. Why many people think he is one of the best in the business is a total mystery. His constant yelling during pays that aren't even close to being anything exciting is just one of his many faults. I see how many new-comer NHL fans can think he makes the game exciting, but to those who follow and know the game get sick of his constant antics. You are better off putting the sound on mute and watch the game that way. His constant use of the word "DRIVE" every time someone shoots the puck even if its 20 feet wide is unbearable to the ears. His un-related puns and "facts" he tries to bring to the broadcast only to realize that it has nothing to do with the game or anyone's interest but his own.

Help spread this petition to all hockey loving fans and get him removed quickly that we can enjoy our games the way twas always intended....but not plugging our ears and listening to his nonsense.

Here is a video of Mike Emrick in action: