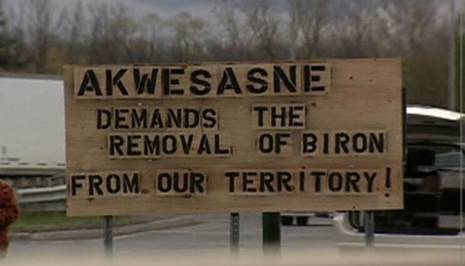 285 people have signed this petition. Add your name now!

Mike Biron was a former Officer for The Canadian portion of Akwesasne in Saint Regis, QC. He was let go and moved to another undisclosed police station elsewhere due to the communities outrage. On November 14th, 2008 he was involved in a high speed pursuit from Cornwall, ON that ended on Akwesasne Territory (Cornwall Island). His negligence in the pursuit caused an accident at the crossroads when the one being pursued struck another vehicle and killed married elderly Eileen and Edward Kassian. The driver of the van being pursued, Dany Gionet also didn't make it. The family of the Kassians filed a law suit against AMPS and the Canadian federal government for negligence resulting in death. (Mike Boron and Kenneth Chaussi's charges we're ultimately dismissed in 2010)

His negligence didn't end his police career. He continued on as an Akwesasne Mohawk Police Officer. Then another incident happened on October 26th 2011. He started to chase a car in the village of Saint Regis and continued to chase the car into the American portion of Akwesasne. (THERE is no border/customs to pass through in Saint Regis) He unlawfully pursued a car in a area he had to jurisdiction in. He STATED that he didn't pursue them once on US portion. Which was a lie. Ultimately the car being driven by Amber Aliff struck a tree at a high speed. Amber Aliff was transported to Massena Memorial Hospital where she was pronounced dead. Dakota Benedict was pronounced dead at the scene. PASSENGER Syndey Oakes was flown to Burlington VT for critical care.

That makes Five lives that have been taken while under Mike Birons PURSUITS. The people of Akwesasne who do NOT want to have this happen to anymore of our young people, please sign this petition.