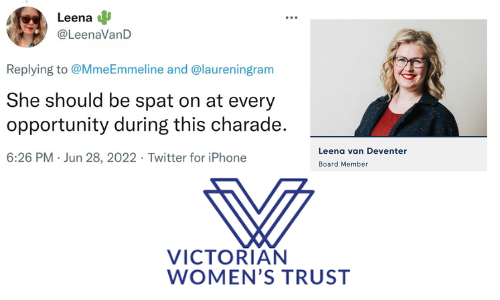 Leena van Deventer must be removed from her position as board member for the Victorian Women's Trust.

On June 28, the Daily Mail reported that a UK woman is suing the UK Survivors' Network for indirect discrimination after they allowed a trans identified male to attend a support group for female victims of male sexual violence. The woman, clearly suffering from post traumatic stress disorder, had a panic attack triggered by the man's presence in what she thought was a safe space.

In response to this news, Leena van Deventer tweeted that this woman - a survivor of child sexual abuse and rape - "should be spat on at every opportunity". She went on to wish death upon the woman and slurred her as a "shitheel".

The Victorian Women's Trust must immediately remove Leena van Deventer from their board. She has no business representing women or women's issues given this appalling and abhorrent abuse of a woman. Her lack of understanding regarding trauma informed care for victims of male sexual violence is shocking and borders on victim blaming.

We call upon the Victorian Women's Trust to fire Leena van Deventer and to review their misguided policies that position the interests of trans identified males above those of actual women. There are countless well funded LGBTQIA+ organisations that can accommodate the needs of trans identified men. Victorian Women's Trust must return to their original mission of advocating for girls and women.