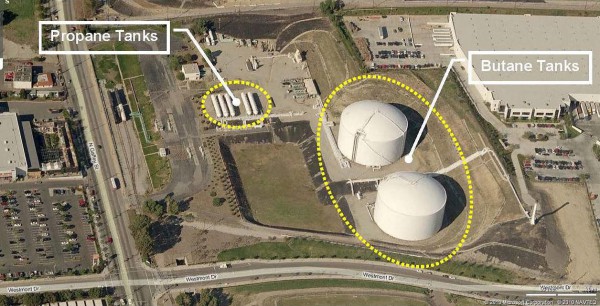 The LA Harbor area is home to Rancho LPG LLC, a 40 + year old, 25 Million Gallon butane and propane gas storage facility. This is the largest stored volume of highly explosive gas located in a very densely populated area and hub of international commerce. The stored gas at this facility represents the energy equivalent of over 50 atomic bombs! Brought in during the Nixon administration for his close friend and CEO of the company at that time, the facility was expedited through the permitting processes and exempted from public hearings and many regulations. The operation sits within a LA City Planning documented "Earthquake Rupture Zone" with a magnitude quake potential of 7.3. The facility's 12.5 million gallon tanks are built to a seismic substandard of 5.5-6.0! A "single" tank has a blast radius of impact of over 3 miles! A "cascading failure event" upon the multitude of adjacent flammables increases that range of impact dramatically! Dept. of Homeland Security has confirmed that these tanks are a Tier 1 target of terrorism and a soft target that cannot be protected. The potential for a catastrophic disaster due to its many vulnerabilities are overwhelming in scope. Please sign this petition to support immediate action on this critically important issue BEFORE IT'S TOO LATE!