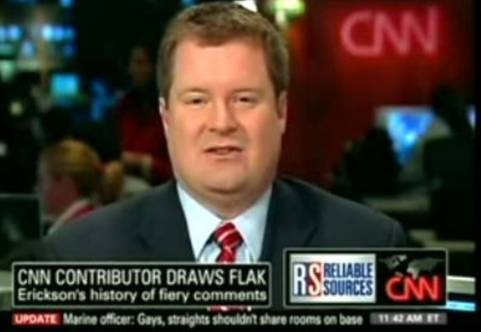 We the undersigned individuals are appalled by the actions of your radio personality Erik Erikson, by his disinviting Donald Trump from the Red State Meeting over the weekend of August 7-9, 2015. He did so for the following reasons:

1. He is a supporter of the politically corrupt (and more than likely Bilderberg controlled) RINO (Republican In Name Only) establishment candidates.

2. He despises Mr.Trump, because he will not be Politically Correct and will say what he is thinking or feeling at that moment in time.

3. He refused to state that he will not consider a third Party/Independent campaign for President.

Erikson has demonstrated, by his actions that he is for The RINO's and only the RINOs, and we have seen what the RINOs are doing to all Conservative Republicans, as any thinking of any type other than their power is not accepted and they could care less what the peons (the working middle class) citizens want, as evident by Speaker Boehner and Senate Majority Leader McConnell.

Therefore, we the undersigned demand that Erik Erikson be fired and removed from the airwaves of WSB Radio and all other Cox Media services, otherwise we will impose an all-out BOYCOTT of Cox Media, and their sponsors, until such time as he is removed from the airwaves, and is taught that we the peons are more important and powerful than the corrupt political elitist RINOs and their handlers.