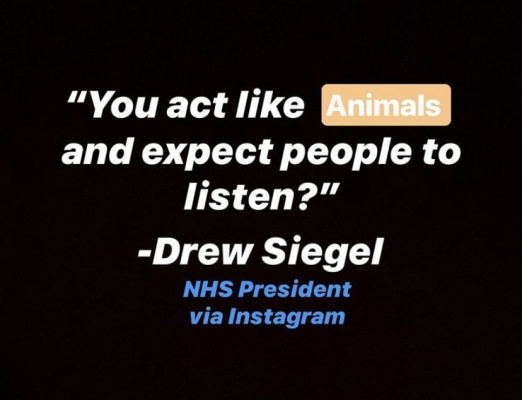 The recents post made by Drew shows the type of person he is. He has little regard for the struggle that our black community faces and uses nasty language when describing people of color (such as acting like an animal). His use of animal was referring to a video he shared, which falsely claimed that a majority black group of protesters attacked and killed a store owner. After being called out for it, he defended his use of the word animal as well as defended the sharing of a misleading video. Drew does not hold the standards that the President of WHS Honor Society should.

One of the four pillars of the honor society is character, and as our nation faces a terrible tragedy, he has shown the type of person he is.

This petition calls for the removal of Drew as President-Elect, and to either promote the Vice President-Elect to his position, or to call for a new election, whichever the society’s leadership/advisors decide.

The same goes for his position in Student Government, his actions do not set the type of example leaders should be setting. This Petition calls for him to be removed from his position as SGA historian and to promote the historian runner up to the position or for a new election to take place, whichever SGA leadership/advisors decide.

Other examples of racist or inappropriate behavior by Drew can be found in the comment section of this petition.