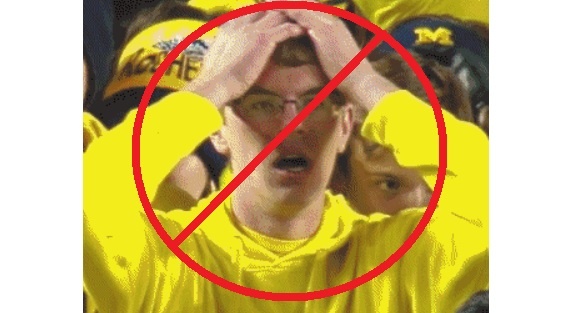 During the last Michigan home football game, as soon as Michigan had a turnover, ABC quickly turned their cameras to a cutout of a Michigan student who was visibly upset after a loss to an inferior school a few years back.

This is not the type of image that we should be presenting in our own stadium.

I contacted the University and was told that the cutout was purchased by an individual with rights to their own image. The explanation was that there is nothing inherently offensive or inappropriate about it.

However, I am starting this petition with the goal of collecting 100,000 signatures to present to the Atheletic department to ask them to remove this cutout before the Penn State game.

This cutout does not reflect our proud history and tradition at UM - instead we should promote the positive messages of student athletes like Cade McNamara, Isaiah Livers, Chase Winovich, and so many that came before them.

We should only allow cutouts of true fans and legends like Glen Rice, Charles Woodson, Desmond Howard, Tom Brady, Anthony Carter, Moe Wagner, and on and on...

Thanks for your support and Go Blue!