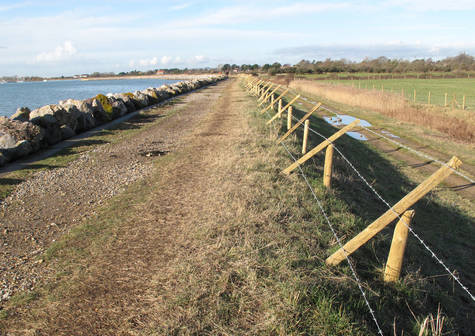 719 people have signed this petition. Add your name now!

Having issued a notice for the removal of the barbed wire fence WSCC have now rescinded that order and claim that because it is on private land they cannot act. The fence of ‘lethal’ barbed wire is offensive, inappropriate and ugly along a 200 metre stretch of coastal footpath in an AONB within the SSSI area of Chichester Harbour Conservancy!

The fence adjoins the public footpath and is a serious danger to stumbling adults and toddlers but the fact that the fence is merely single strands of barbed wire does allow dogs to perceive that they can run through and in doing so risk tearing their dogskin. Which as any dog owner who has encountered barbed wire injuries will agree, can be extremely serious.

The fence contravenes the Highways Act 1980 Section 164, “where there is any land adjoining a highway … barbed wire which is likely to be injurious to persons or animals lawfully using the highway, the highway authority may serve notice in writing upon the occupier of the land requiring him to abate the nuisance within a stated time” these are the grounds on which the original order to remove was issued. We would like WSCC to consider the views of the many hundreds of dog walkers and ramblers who regularly walk this pathway for whom it has become a danger as well as an eyesore in this beautiful unspoilt landscape.