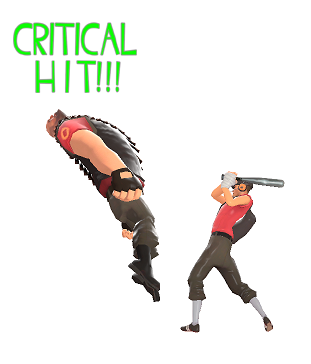 Random Critical Hits, or random Crits are a terrible detriment to what would normally be an amazing game.

For those who are not informed on the issue of random crits they are when a weapon of some kind is given a 300% damage bonus, this percentage varies based on amount of damage dealt and whether or not you are using a melee weapon, if additional information is needed follow this link
"http://wiki.teamfortress.com/wiki/Critical_hits#Critical_hit_chance"
The playerbase has shown time and time again that this mechanic is a terrible design choice for many reasons the main reason being
1.) They Discourage Skill
Players who get kills based on random crits are gaining kills based on luck reinforcing that if they get in potentially bad situations that luck can save the,
2.) They do not effect Gameplay equally
The Soldier, Demoman, and Heavy are classes that gain significantly all the benefit from random crits while classes such as the Scout, Spy, and Medic suffer all of the downsides from random crits.
3.) They add Randomness to the Game
As silly as it sounds the main argument for defending random crits is that they are needed to make the game feel random. That is not the case because we have a large pool of weapons and strategies to make the game feel new and exciting.
4.) They are a Terrible Base for Balance
People prefer weapons that are reliable, randomly getting a ton of damage is not something anyone takes into account and they create weapons that are virtually straight upgrades from there counterparts such as the market gardener. They also discourage players of using weapons like the eyelander, Bazaar Bargain, or any medigun because what good does working hard to build up your weapon if you can be killed by luck anyway.
5.) They Ruin Class Balance
The spy and scout classes are reliant on there unique abilities to flank enemies and make up for there low health, the issue is when they are doing there job they randomly get killed by melee weapons of classes they should normally defeat, Spies should not be reluctant about taking out an engineer because he could randomly swing a random crit that will one shot kill you and a scout should be able to fight a sniper without fear of being instantly killed by a melee crit.