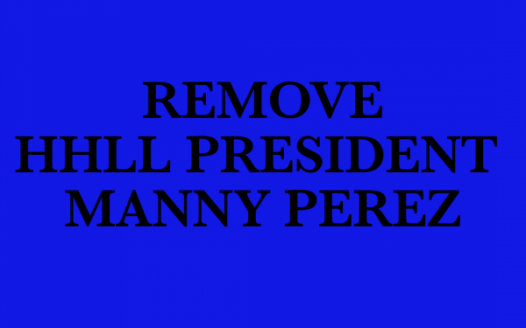 This petition is submitted on behalf of the general membership of the Hacienda Heights Little League (HHLL) with full support from the original families of founding members of the Highlander Baseball Complex (HBC).

The Hacienda Heights Little League general membership (player's parents) and HBC founding families urge the acting HHLL board of directors, District 56, Western Regional & Little League, Inc. to intervene by calling an emergency meeting to remove Manny Perez as appointed president of the HHLL board for his failed leadership, lack of transparency, self serving interest, to prevent any further degradation of the Hacienda Heights Little League program and deterioration of The Highlander Baseball Complex.

The HHLL constitution (7/2013) & Little League rules are very important as they hold the foundation and integrity of the HHLL program. Mr. Perez has abused this communities trust by repeatedly violating the HHLL constitution (7/2013) and creating his own version and interpretation on many occasions. His actions have compromised the integrity of said rules in exchange for his benefit without any regard for the whole HHLL membership. It's important to note that Mr. Perez is NOT a duly elected board member nor the owner of the HHLL or HBC. His official capacity is that of an appointee. Appointed officers have NO authority to take any actions.

Below are some examples of Mr. Perez's self serving actions and violations of the HHLL constitution (7/2013);

1. Mr. Perez has falsely represented himself as a duly elected board member when in fact he was NEVER voted in as required the HHLL constitution (7/2013). HHLL, District 56, Western Regional and Little League DO NOT have record of the required notice for the annual general membership meeting, when and where it took place, the list of the membership that voted in person or by proxy as required in HHLL constitution (7/2013) Article V section/s 1,2,4,

*A. In the minutes of the January 30, 2020 District 56 meeting. It’s noted that Mr. Perez intentionally misrepresented and falsely introduced his wife as Vice President of Hacienda Heights Little League, which we all know isn't true due to Jose Ramirez being appointed VP.

*B. On January 13, 2020, in a board meeting he requested a motion to require HHLL team sponsorship's while being clearly aware the 501 C is INVALID.

2. Mr. Perez's misleading actions in #1 A,B, clearly violate HHLL constitution (7/2013)Article II section 1, to implant firmly in the children of the community the ideals of honesty, loyalty, good sportsmanship and respect for authority.

*A. Mr. Perez has an unknown verbal arrangement with the So. Cal. Stixx Travel Ball organization. Mr Perez’s arrangement grants the So. Cal. Stixx access to the Highlander Baseball Complex for tryouts, practices, games, and tournaments including the use of the park lights at the expense of the HHLL membership. The arrangement can be confirmed with screenshots from the So Cal Stixx facebook page which reveals a January 26, 2020 9 am tryout date at the HHLL fields, a March 1, 2020 picture of a game ball winner at the HHLL fields and the fact that Mr. Perez’s grandson is on the team. Mr. Perez’s actions are in direct violation of the HHLL’s Constitution and Little League Rules. As a result of Mr. Perez’s actions, the HHLL membership question if they are the one’s absorbing the costs for electricity, water, grounds keeping and maintenance for Mr. Perez’s grandson's travel ball team. In addition, Mr. Perez never accounted for revenues collected from a Stixx tournament entrance fees, vendor’s fees and game fees.

3. Mr. Perez failed to operate HHLL in accordance with Section 501-(c)-(3) of the Federal Internal Revenue Code requiring HHLL to operate "exclusively" as a non-profit educational organization providing a supervised program of competitive baseball as required in HHLL constitution Article II section 2. In addition Mr. Perez failed to file the HHLL 2018 taxes on time. This also prevented HHLL from soliciting for sponsorship revenue which has ultimately resulted in a financial shortfall for the league.

4. Mr. Perez discriminated against the Highlander Baseball Complex founding families, the very families that built the fields our kids play on when he elected to NOT accept the HBC founding families from joining membership at the cost of $5.00 per year. Mr. Perez indicated he would not allow outsiders. This in violation of HHLL constitution (7/2013)Article III Section 1, 2(b), Article IV Section 1.

5. Mr. Perez has failed to notify the general membership of any meetings much less give the required notification of said meeting ten (10) days in advance as required in HHLL constitution (7/2013)Article V Section 2.

6. Mr. Perez has questionable accounting practices and failed to hold annual meeting for the membership to be informed as indicated in HHLL constitution (7/2013)Article V Section 6 (1-4)

7. Mr. Perez made unethical personal equipment purchases through the HHLL vendors for self gain.

8. Mr. Perez has yet to clarify the compensation to HHLL for the use of the fields by the Styx travel ball team his grandson plays on. HHLL constitution (7/2013)Article VII Section 2(a,b,c,d,f,g)

9. Mr. Perez has yet to clarify the compensation to HHLL from vendors invited with his approval to sell at the baseball complex. HHLL constitution (7/2013)Article VII Section 2(a,b,c,d,f,g)

10. Mr. Perez's failed to manage and minimize expenses for the HHLL during the pandemic. HHLL constitution (7/2013)Article VII Section 2(a,b,c,d,f,g)

11. Mr. Perez held unofficial secret meetings to relocate the HHLL in a $5 Million dollar deal without first holding a board vote, excluding the Building And Property or Grounds Committee.

*A. Mr. Perez falsely misled local government and school district officials when he falsely misrepresented himself as having the sole authority to negotiate the destruction of the Highlander Baseball Complex and relocation of the HHLL to a new sports complex without including the Board of Directors much less voting for any proposal.

*B. Mr. Perez participated in negotiations regarding a new sports complex without presenting the proposal to the Board of Directors for a vote.

12. Mr. Perez improperly confronted an young umpire for ejecting him from a game. He taunted the umpire by asking him if he knew who he was? Telling him that he would have him gone.

The Hacienda Heights Little League membership along with the Highlander Baseball Complex founding families can no longer tolerate this kind of failed leadership. Mr. Perez continues to degrade the integrity of the whole little league program.

We need a leader who is honest, transparent, and upholds the HHLL Constitution. A president who will listen to the members, who leads by example, who applies the rules fairly to every member. We do not need someone who is willing to sacrifice HHLL and HBC to feed their own ego and empower himself at the cost of the whole membership.

This membership entrusted Mr. Perez and he FAILED us. We urge the HHLL, District 56, Western Regional, & LL. To remove Manny Perez as president of HHLL. The integrity of this organization and the future of our kids depend on it.