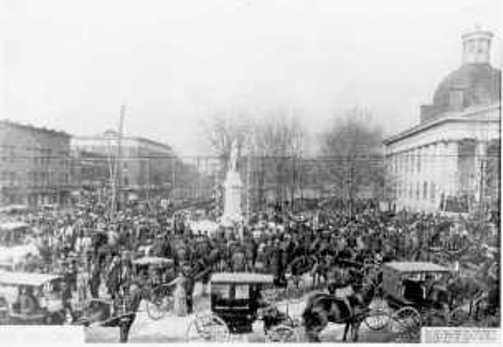 Injunction in the Removal of the John Hunt Morgan Monument

This is the legal petition for a "cease and desist" injunction in the removal of the John Hunt Morgan Monument in Huntsville, Alabama; residing at the Madison County Courthouse and which stands on County Property, not City Property.

This injunction will be served to the Madison County, Alabama Government both by this petition and by a legal filing through the Judicial Court System.

Due to pressure from “Progressive” Groups in the area directed towards the Madison County Commission of Alabama who holds the fate of this monument in their “hands”; which is public property paid for by the taxpayers, they voted unanimously on a resolution to remove this Monument on June 10, 2020 which has stood since 1905.

We ARE NOW, as WE THE PEOPLE in the FIGHT here!!

This monument has been under attack since 2016 by “Progressive” Groups in Huntsville, Alabama. The first being Tennessee Valley Progressive Alliance.

The facts remains as such:

1. Madison County, Alabama citizens own this public property and this monument.

2. The tax payer citizens will pay the brunt of the $25,000 fine imposed by the State of Alabama if it is removed. Alabama has the Preservation Act of 2017 that legally fines any Government within the State if a monument over forty years or older is moved or altered. “Tennessee Valley Progressive Alliance” raised through “Go Fund Me” $30K plus for the fine; however they have NO CLUE in regard to LEGALITIES in respect to TAXPAYER’S PUBLIC PROPERTY!

3. The removal of this monument, if this is to happen, will cost the Madison County, Alabama taxpayer citizens tens-of thousands of dollars in contracting cost with the removal of this monument. The four monuments removed from New Orleans a few years back cost the City Taxpayers there approximately $2.1 million. This puts it all in perspective for the Madison County, Alabama Taxpayer. This also puts it all in respect with myself and others who wants to ensure the Preservation of USA History; which includes the “Good, The Bad, and The Ugly”, for our Future Generations to learn from! This ensures We the People of OUR USA, do not repeat history!

George Orwell’s “1984” written in 1949 said it best outside of the reference to “removal” of monuments; “Every record has been destroyed or falsified, every book rewritten, every picture has been repainted, every statue and street building has been renamed, and every date has been altered. And the process is continuing day by day and minute by minute. History has stopped. Nothing exists except an endless present in which the Party is always right.”