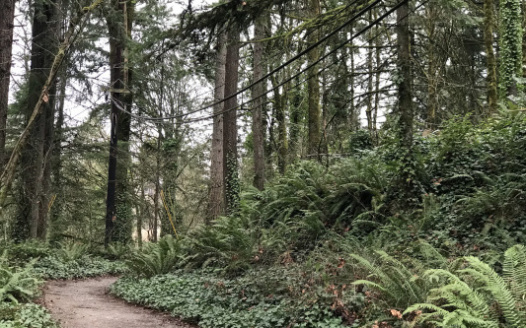 We are petitioning Portland General Electric (PGE) to relocate the power line and its transformers that serve the Cascade / Evergreen / Wildwood neighborhood from its current dangerous and repeatedly failing location. Petition signers include members of the Arlington Heights community and users of the Wildwood trail.

This current overhead powerline route through Wildwood dates back many decades. It has not been improved for many decades according to long term residents of the community. An outage along this line results in loss of electricity to the entire community highlighted in the attached map.

The current route has been a source of chronic and regularly repeatable power outages to the entire community. They have occurred repeatably for quite literally decades (residents of 30+ years tells stories of meeting PGE technicians after storms in the 1960’s with coffee mugs and guide them into Washington Park to show them where the outage is).

Power outages - like the recent 3 day outage in January 2019 - typically last multiple days due to the complexity of fixing the downed lines, causing hardship when electricity is most needed. The community is usually also downgraded to the bottom of the emergency list due to the smaller size – further extending the time before power is restored. New residents to the community are told upon moving in to expect several days without power every year due to this single point of failure of a poorly place power line – a concept that has lost its “folksiness” in the year 2019.

Predictability implies preventability, and thus we are petitioning PGE to invest in an alternative route to provide power to the community and safeguard the current route over the heavily used Wildwood trail.

Issues to PGE with the Current Installation

The current powerline and transformer placement presents a number of business issues for PGE to consider:

- Increased expenditure for monitoring of danger trees in the power corridor through the Washington Park forest. A cursory review of the current powerlines show multiple instances where trees are actively touching collocated lines and numerous trees imminently in danger of future falls onto the power lines.

----> For instance, in a January 2019 outage, PGE sent multiple tree removal services to the site before finding a service capable of handling the multiple downed trees in an inaccessible to vehicles location

- Increased liability due to outages in the community

- Increased risk for a life-threatening West Hills fire by placement of transformers and lines in a heavily wooded and overgrown urban forest. This risk is accentuated in this location due to the “single access point” nature of Cascade Drive into the community. A fire sparked by a downline will block exit from the affected community.

Issues to the Neighborhood with the Current Installation

In addition to increased costs and risk to PGE, the current powerline solution presents a number of issues to the affected neighborhood:

++ Annually repeated multi-day power outages to the community causes a number of hardships, all of which have occurred in the community:

- Loss of use of medical equipment requiring electricity for health-impaired residents, loss of refrigeration of critical medicines

- Loss of heat and services to the community of homes on Cascade and Evergreen, a hardship particularly impactful to a number of homebound households (e.g. elderly or special needs).

- With multi day outages considered “the norm”, many residents relocate during the annual multiday outages to hotels in downtown Portland – an expense not covered by insurance.

++ Given the location of the powerlines to the Wildwood Trail (see attachment for photos), the recurring danger tree falls onto the powerline present a number of issues

- Loss of access to the Wildwood Trail – a cherished part of Portland’s reputation. The most recent powerline outage closed the trail for more than a week.

- Increased risk to the high volume of Wildwood trail hikers. The current lines in some locations are only ~15 to ~20 feet above the trail, presenting a particularly powerful risk. Given the high volume of traffic on the Wildwood, there is an - increased exposure that a downed line will cause injury to life and limb before it can be isolated by PGE.

- To maintain the lines properly to minimize risk of future outages, a large number of trees would need to be removed – which is contrary to the goals of Washington Park.

++ Finally, the risk due to fire to the community can not be understated. As noted in the previous section, the serviced community is limited to a single point of exit in the event of a fire. This point of exit is directly above the powerlines – and thus highly likely to result in a catastrophic scenario in which the one escape route is blocked if a fire were to be sparked due to a downed line during periods of increased fire risk.

Proposals to Address the Issue

The petitioners would like to pursue a constructive solution to this repeated problem. As such, we have several proposals to PGE for consideration.

- There is a very clear and present issue with the current powerlines servicing the Cascade / Evergreen / Wildwood communities.

- Due to the current poor placement of a powerline and its transformers, recurring multiday power outages have become the norm, extending back 30+ years.

- There are substantial costs, liability and risks being incurred by PGE in maintaining the status quo of a poorly placed line dating back decades.

- There are substantial costs and risks to the serviced residences and Wildwood Trail users associated with the poorly placed power line and transformers.

As such, we are petitioning Portland General Electric to invest in an alternative route to provide power to the community and safeguard the current route over the heavily used Wildwood trail.