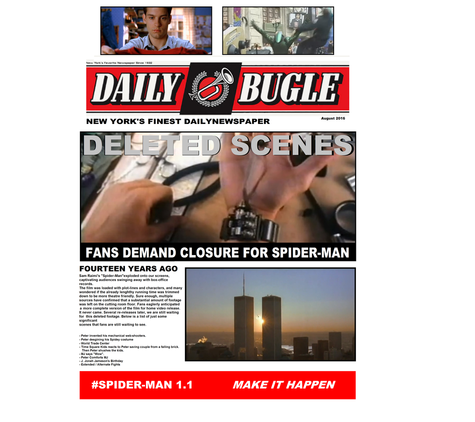 What you see before you is a petition calling for an extended cut of the 2002 film Spider-Man.

Various sources confirm a great wealth of material that never made it into the theatrical cut of the film and - several years later - we are still eager to see these deleted scenes (Including Peter Parker's Mechanical Web Shooters, World Trade Center and Peter designing Spidey costume) As with your previous Spider-Man 2.1 release, we hope to see this footage reinstated into a more complete version of the movie (Same thing with Spider-Man 3).

We the fans couldn't be happier that you continue to support the "Spider-Man" franchise. It has generated many happy hours of entertainment, and millions of dollars in revenue. While the series has moved on to a new cast and creative team, the fans of Sam Raimi's original trilogy are still as passionate as ever. With a great license comes great responsibility.