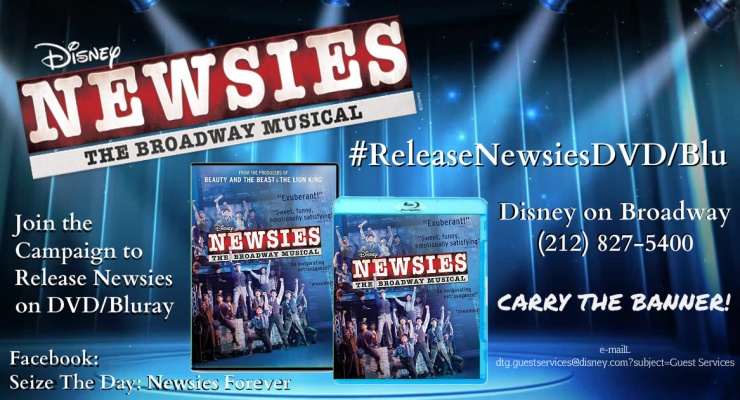 EXTRA! EXTRA! Before the Broadway show was created, NEWSIES was the number 1 title request by the fans for a staged production. The constant growing pressure worked and Disney finally responded. Due to its overwhelming success, 2 months after it opened at the Paper Mill Playhouse, Disney announced it was moving to Broadway. Newsies cost 5 million to produce and became the fastest Disney musical on Broadway to turn a profit. After 1,004 performances, it went to national tour and finally was filmed and preserved for generations to enjoy.

Having only been made available through digital streaming, Newsie's fans world wide have been begging for a physical release of NEWSIES: The Broadway Show on DVD/Blu-ray. It might take another push from the fans to make it happen. We made our voices heard once, it's time to do it again. We must SEIZE THE DAY and REQUEST that NEWSIES BE RELEASED ON DVD/Blu-ray. LET'S MAKE THIS HAPPEN!!!!!!! PLEASE SIGN THIS PETITION AND SHARE IT ON YOUR SOCIAL MEDIA FOR EVERY NEWSBOY & NEWSGIRL TO RAISE THE BANNER!