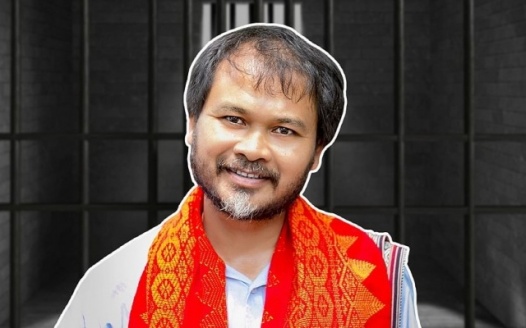 Akhil Gogoi, the leader of the Krishak Mukti Sangram Samiti (KMSS) is a peasant activist and RTI (Right To Information) activist in Assam. For decades, Gogoi has spoken against the corruption, discrimantion and indifferences happening in Assam and India. Lately, he was the forefront voice of Assam’s anti CAA (Citizenship Amendment Act) campaign. The CAA provides fast track citizenship to minorities from the neighbouring countries except Muslims.

Gogoi was arrested in Jorhat, Assam, on December 12, 2019 for his role in the protests against CAA. On May 29, the National Investigation Agency (NIA) had filed the charge-sheet against Gogoi and his three associates for “alleged sedition and terror activities” for their role in protests against the CAA. NIA’s move is an attempt to silence Assam’s anti-CAA campaign against the injustice to its citizens.

On Thursday, July 09, 2020, Akhil Gogoi was tested positive for COVID-19 inside the Guwahati Central Jail. He’s only directed to medical care at Guwahati Medical College Hospital last night (12.07.2020) following his deteriorating health conditions. Gogoi is a husband, a son, a brother and a father to his children. The Guwahati Central Jail is a containment zone for COVID-19, given the prison’s harrowing physical conditions.

The Supreme Court of India has also ordered to decongest prisons in the light of the current pandemic. It's important to note that Gogoi is not a convict, but merely an undertrial political prisoner who's raised his voice against the injustice happening to his citizens. Yet, he has been kept in detainment and has now been tested positive for the novel Coronavirus.

On behalf of Gogoi’s family and citizens of Assam, we urge the release of the peasant and RTI activist Akhil Gogoi.