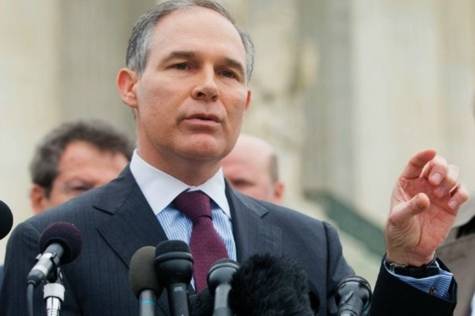 This is an aggressively bad choice, a poke in the eye to a long history of bipartisan cooperation on environmental issues, to a nation that has come to depend on the agency for healthy air and drinkable water, and to 195 countries that agreed in Paris last year to reduce their emissions of climate-changing greenhouse gases in the belief that the United States would show the way -- New York Times Editorial, December 8, 2016

With the appointment of Oklahoma Attorney General Scott Pruitt — a climate change denier, close friend of the fossil fuel industry and opponent of the Clean Power Plan — to be head of the Environmental Protection Agency (EPA), President-Elect Trump has continued to show that we will have major struggles ahead to tackle the planetary crisis of climate change.

With 195 nations in Paris last year agreeing to cut greenhouse gas emissions to limit global warming and work to protect God’s creation, the world took a major step forward to seriously address climate change. Through a variety of ways, individuals and communities of faith are acting to reduce our carbon footprint.

Many businesses and other institutions are working to reduce their emissions thus transforming the very way we live and work in our country. Americans overwhelmingly support clean renewable energy like solar and wind, which not only cut pollution but create many fold the number of jobs in fossil fuel industries.

But we need the government of the people to act as well. Appointing climate-deniers far outside the mainstream of scientific consensus to run the EPA will not get us there. Rolling back common sense clean air standards that are saving lives and creating jobs will not do it, either.

We call upon you, our elected leaders to reject climate change denial and enact policies that will hasten the transformation of the world’s economy to one powered by clean, renewable sources of energy. From our faith perspective, this is a moral, ethical and spiritual matter, one that we take with the utmost seriousness – it is the mandate of generational justice, preserving and handing over a viable, live-able Earth for future generations of human and other than human life.

We stand with all people of goodwill in our work to address climate change and it’s closely connected impacts on human justice, poverty, peace and a flourishing community of life. We urge you, our elected leaders to do just that – lead our nation in this critical work by emphatically rejecting the appointment of Scott Pruitt as our next EPA Administrator.