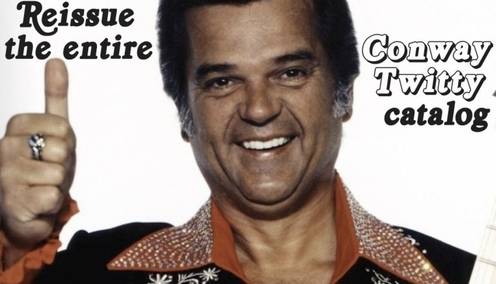 Conway Twitty is one of the most successful entertainers in history. His career spanned 5 decades and multiple genres of music, earning him a staggering 55 number one hits. He received numerous awards from the Academy of Country Music, the Country Music Association, two Grammy Awards, and induction to the Country Music Hall of Fame. It's nearly impossible to name another artist who achieved such heights of super stardom and yet, the majority of Conway's nearly 60 albums have never been reissued in the digital age.

We, the tens of thousands of Conway Twitty fans, are shocked and saddened by this state of affairs. We are appealing to Universal Music Group and Warner Music Group, who own the bulk of Conway's recordings, to finally do right by Conway & his family and give the fans what they want. Please make Conway's entire catalog available on CD and/or digital download so that current and future generations can continue to discover and enjoy the music & voice of one of the greatest singers who ever lived, the best friend a song ever had, the one & only CONWAY TWITTY.