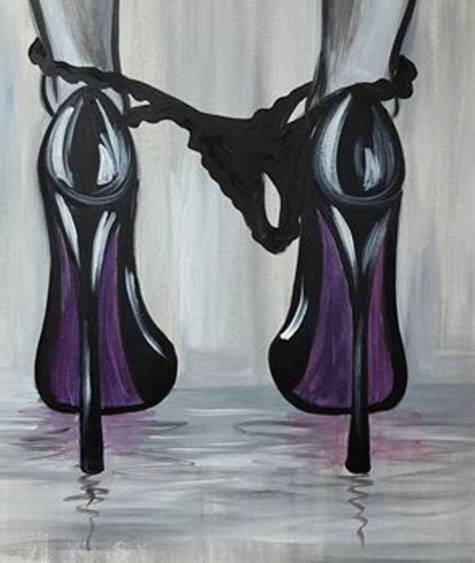 These were removed when an unnamed executive informed Chris that these paintings are "overtly sexual in nature and/or off brand."

I am the artist who created Stiletto Seduction. I will discuss mine briefly for that reason, though the other three paintings were vetted equally unfairly.

I recognize that the pair of panties wrapped around the ankles of these high heeled shoes suggests a bit of sexiness; that is the point. But in reality, how offensive is it? There is no nudity, no human flesh, there isn't even a human figure in this image. It is a pair of feet, which I may add, was very well composed and tastefully executed. It is only implied that there "may" be something sexual going on.

One of the most upsetting things about the decision is the hypocrisy. From a company who has actually praised its popular licensees for being overtly sexual and using profanity in their presentations, to the point that some raunchy expressions have become household terms in Paint Nite, i.e. "Just the Tip!" "Mine is too wet!" and so on. Some of us have even been pressured to use the famous oath that contains foul language. It is also becoming a commonality for an entire group of customers to paint penises all over their paintings. We have even had nude PEOPLE at our events, a concept that did very well in some cities I imagine. In all these aspects, the "adult entertainment" factor in PN has an overwhelming presence. With that being said, I felt "Stiletto Seduction" actually falls exactly in line with our brand.

Do you feel this was a fair call? Out of thousands of paintings, these four? When we have numerous nude male paintings showing actual nudity, and even a painting of poop in the library? Do all those represent the brand better than these four? What about the upwards of two thousand paintings that are poorly executed, sloppy, or copied several times over by fellow PN artists. When are we going to remove those for poor representation? Would you rather see more QUALITY vetting than have the opinion of one (or even a few ) people dictate what is just "too much" for an adult crowd?

Are we not a 21 and over party company? Can we not leave it up to the customers to decide if they would rather paint a sexy pair of stilettos, or a tree, since clearly they have dozens, and sometimes even hundreds, of other options to choose, no matter the market?

I have created this petition because many of you have also spoken out against this censorship and hypocrisy. If you feel these paintings should have the right to remain active in the library, and that it should be our decision whether a risque painting will do well for our customers and markets, please sign and share.