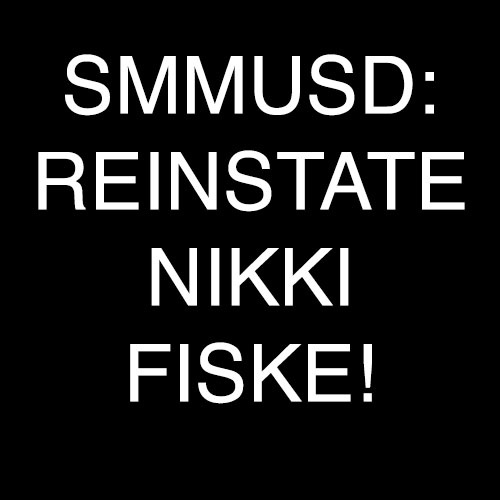 MRS. FISKE HAS BEEN REINSTATED! Thank you so much to everyone who stood behind her through this ordeal; who signed this petitioned, who wrote to SMMUSD and who offered kind words of love and support.

Thank you to SMMUSD, as well, for recognizing what incredible value Mrs. Fiske brings to the table as a teacher and for putting her back in the classroom!

SMMUSD - We want you to:

2) Perform a reasonable investigation prior to determining disciplinary action, if any.

3) Allow Mrs. Fiske legal representation and a voice in the investigation so all facts and variables are accounted for.

On 10/10/18 the Hollywood Reporter published this article.

See how it says "By Nikki Fiske" ?

She was told that she would not be highlighted and that they were simply doing research for a larger project. Then they published a sensationalist slander piece under her name.

Nikki Fiske has requested her name be removed from the article, and the publication has not complied.

Even after SMMUSD, Mrs. Fiske's employer, put her on a forced leave of absence as a result of the article.

A forced leave of absence with no due diligence is a pre-emptive retaliatory act and may be a violation of Labor Code section 1101 , which protects employees who engage or participate in politics.

Mrs. Fiske is widely loved and adored by her students and parents alike, and has been for over three decades.

Mrs. Fiske is being investigated for potentially violating the Family Educational Rights and Privacy Act of 1974, which prohibits access to educational records of students. However, sharing observations about a student's social behavior from decades ago is not a disclosure of educational records or other classified information.

Stephen Miller is not a child and is neither a student nor a parent within the SMMUSD district at this time. Access to and information about his educational records was not provided.

SMMUSD took disciplinary action against Mrs. Fiske without performing due diligence. This has created upheaval and distress amongst the Santa Monica community.

Ultimately it is the students in her class who suffer from her "temporary" suspension as their educational path has been interrupted by their teacher's sudden (forced) absence. They miss their teacher and want her back!

Reinstate Mrs. Fiske to her position at Franklin!

Want to do more to help? Email Ben Drati, the superintendent of SMMUSD directly!