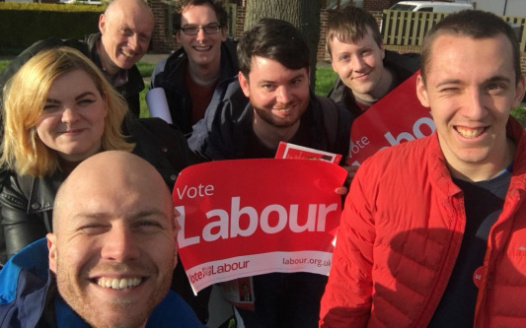 I have been expelled from Labour and would value other Labour Party members to support an appeal against this decision. Please only sign this if you are a Party member and indicate your name and which CLP you are in.

*Update*: I have the backing of (what would be my current CLP) Sheffield Heeley. The CLP Secretary said the following:

"On Thursday 22nd February 2018 Heeley CLP passed the attached motion calling for you to be reinstated into the party. Several people in the meeting spoke about your campaigning work for the party and hard work you have put in helping Labour candidates in elections. No one in the meeting spoke against the motion and it was passed in a meeting of 65 members with 0 against and 5 abstentions."

Here is a statement opposing my expulsion:

I have always voted Labour, and personally and as as co-founder of Sheffield 4 Corbyn campaign last year I have recruited 100s of members to the Party.

During the 2018 Council elections, I spent many days campaigning in the neighbouring Ward, Graves Park, to oust a sitting Lib Dem.

In the 2017 General Election I campaigned in three ways:
- in my own constituency, Sheffield Heeley - 3 large leaflet rounds, 2 school gates leafleting, 1 session of phone banking.

- Mobilised members and Labour supporters to campaign, especially in marginals, and organised car-pooling, as well as constant publicity for canvassing sessions across Sheffield via Momentum Sheffield's social media platforms.

I have contributed to the Party as a member since I joined in 2010. I have been leafleting, going door-to-door canvassing and mobilising others for national, local and EU Parliamentary elections and the EU Referendum. I have been more involved since May 2015, and more still since September 2015 when Jeremy Corbyn won, having been a co-chair of Momentum Sheffield. I have campaigned for Labour in 2010 and 2015 general elections, in this year's by-election in Brightside, supported Labour council candidates in Sheffield and in Rotherham against UKIP, canvassed in Arbourthorne to 'Remain' in EU and repeatedly leafletted the whole of the nearby estate, Lansdowne and other streets locally.

This is in spite of widespread distrust, personal rudeness, hostility and petty manoeuvrings by some established and more right wing members in the local Party.

I may be on the far left of the Party but a diversity of views is essential if, as many people want, Labour is to be a 'broad church'. I believe in a pluralist and democratic party.

So what have I been expelled for?
being supportive of, or involved with the Alliance for Workers' Liberty, a Trotskyist group.

So, a quick response:
- I am no longer a member of AWL
- AWL does not stand candidates against Labour and is fully supportive of the Party, so even if I was still a member, that shouldn't be grounds for expulsion. I have actively encouraged other socialists not to stand against Labour.
- I am not an 'entryist' as I don't want Labour taken over by a small clique of Trotskyists or of anyone else. I share some analysis with Trotskyists (and with Marxism in general) but I don't call myself one and don't follow a programmatic route or directions set down by a group or one theoretical tradition.

So, what's Labour's process for assessing my guilt?

There is none! No process of hearing or appeal or specific evidence has been given to me. The letter says I can apply for 're-admission' (i.e. not challenge the basis of my expulsion) normally after 5 years!
ONE QUESTION TO LABOUR MEMBERS: DO YOU THINK THIS IS RIGHT? Whatever you know or think of my personal politics or scaremongering about 'reds under the bed' or the AWL.

*Correction, I was previously in Sheffield Central CLP and Nether Edge & Sharrow branch* - I'm now in Sheffield Heeley constituency and Gleadless Valley ward and will be writing to NEC and the Compliance Unit and seeking the support of my fellow members to appeal this decision.

I would like to point out that many people have joined Labour who, unlike me, have not always voted for them - or have actually been in mainstream rival parties. A couple examples:
- Oswald Mosley (Tory MP for Harrow, then Labour member from 1924)
- Shaun Woodward (Tory MP for Witney, defected to Labour in 1999)
and a countless list of councillors moving between parties.

There's not a lot of 'good faith' going around, but for what it's worth, my approach to Labour is the following:
I want Labour to be a mass party of the majority of our society - the working class, putting forward socialist ideas. I want Labour to implement reforms in government as part of a larger movement in and outside of Parliament and Town Halls to run work, community life and our time more generally in our interests, not in the interests of capital and its political representatives.

Thanks in advance for your support.
Max Munday