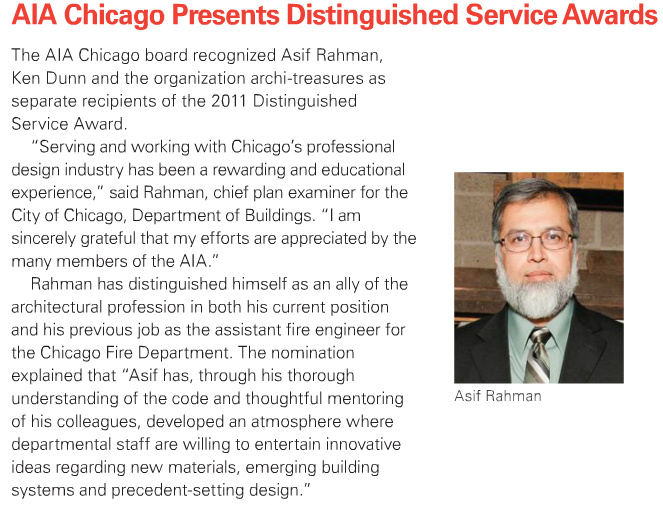 Dear Mayor Emanuel:
As Architects who design the buildings of this great city, large and small, we are deeply disappointed by the recent departure of Department of Buildings First Deputy Asif Rahman. Rarely, has this city seen a public servant who delivers more for the people of this city than Mr. Rahman. He consistently created order where there was chaos, cut through the bureaucratic layers and has always been a vigilant protector of life safety on the buildings proposed for the City. He has earned our deepest respect and we have been in awe of his
professionalism in these matters. Our peers can attest to countless episodes of absolute deadlock, building code conundrums and life safety challenges, where Mr. Rahman was able to apply reason and common sense to complex challenges. His background in the Chicago Fire Department, his intimate knowledge of building construction and passion for life safety, coupled with his pragmatic approach to problem solving, made him the rare individual who could prescribe a viable solution, when most rank and file DOB officials were stymied. It was not uncommon to get return emails from Asif late at night or on the weekends. Despite his overwhelming workload, and meeting requests, he always greeted the professionals of our community with respect. In Short, Mr. Rahman has been a shining star for the city of Chicago. Many of us believe he should have been made Building commissioner years ago. If the entire department followed his lead, the Chicago Building department would be a model of efficiency. The Architecture Community implores you to find a way to bring Mr. Rahman back to the Department of Buildings.