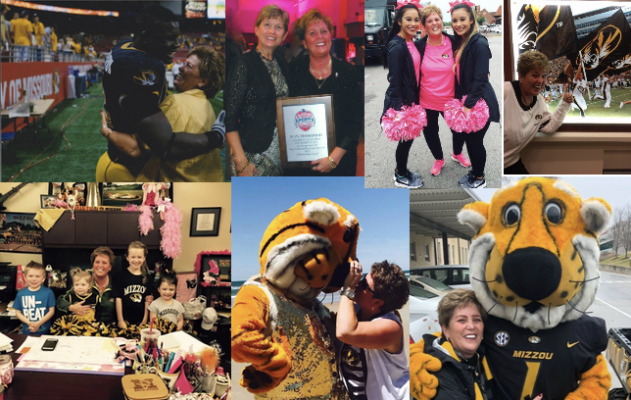 1155 people have signed this petition. Add your name now!

Coach Thompson has been a member of the Mizzou family for the last 26 years. She has worked part-time with no benefits; Why? Because she is a true daughter. Walking into Coach Thompson’s office or speaking to her, you can tell she bleeds black and gold. Mizzou pride paints her walls from floor to ceiling. Coach Thompson is a breast cancer survivor. Through her years of obstacles, chemo and radiation treatments, Coach Thompson never let her duty to the Missouri Spirit Organization fall; Why? Because she had a responsibility to her University. In 2015, Coach Thompson was inducted into the Cheerleading: Missouri Sports Hall of Fame.

Mizzou was founded on the four pillars of Respect, Responsibility, Excellence and Discovery. Like Mizzou, Coach Thompson and her program embody the same four pillars.

Respect: Coach Thompson will go above and beyond to connect with each person individually in her program. Whether that is altering her coaching style or even having individual meetings. It’s hard to find a Coach that cares as much as Coach Thompson does. Quite often, I believe the University of Missouri Sprit Squads are overlooked. Without Coach Thompson, we wouldn’t have something so basic like water at out 100+ degree, 4 hours+ football games. Coach Thompson creates the respect we deserve as Athletes… that can barely get water bottles.

Excellence: When I think of the word “Excellence,” you think of the feeling of “Pride.” Coach Thompson is proud to be a Missouri tiger, just like all of her athletes. She is proud to be a Coach of a Cheerleading Program built on the foundation of Tradition. The reason tradition isn’t altered is because there is a feeling of pride associated with it. Coach Thompson utilizes excellence every day in her program.

Discovery: As a Coach, Coach Thompson pushes us to discover ourselves. Without a compassionate coach, an athlete’s self-discovery is hindered. Coach Thompson gives her athletes the opportunity to grow and realize their full potential on and off the cheer mat. There have been times where athletes on her team have been in rough places; Whether that has been a death of a parent, failing a class, being overwhelmed, she makes it her personal duty (on her personal time) to help her athletes through it.

Coach is Tradition. Did a University based on tradition, fire tradition herself? Mizzou, #MakeItRight.