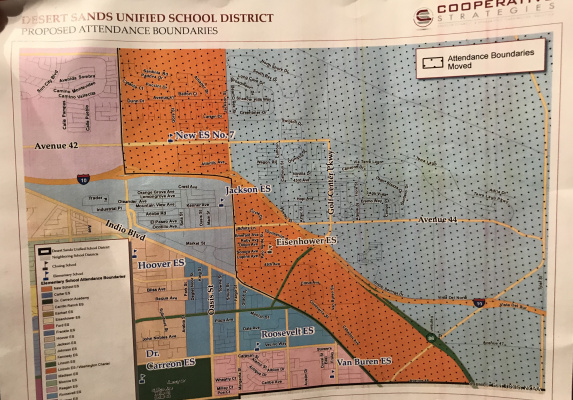 436 people have signed this petition. Add your name now!

On December 12, 2017, the DSUSD School Board unanimously adopted school boundary for Richard Oliphant Elementary School on Gore street in North Indio. The new elementary school is scheduled to open in Fall 2018.

Many residents petitioned and pleaded with the Board during public comment and open discussion to reconsider the boundary as they lack common sense as well as create potential traffic and pedestrian problems for our children. Ignoring the higher taxes and fees North Indio residents pay, the school district adopted a boundary that doesn't make sense and lacked adequate input from North Indio (Shadow Hills) residents, taxpayers and families.

We propose that the district reconsider the new elementary school boundary that unites north Indio and doesnt split it across Jackson Street or the freeway. This petition will be presented to DSUSD board members as well as Superintendent Bailey on December 12, 2017 and subsequently ignored with over 270 signatures. Let's get more signatures and our concerns heard; our School District representatives have an obligation to the public, our children's safety and should consider the overall impact their adopted boundary creates.