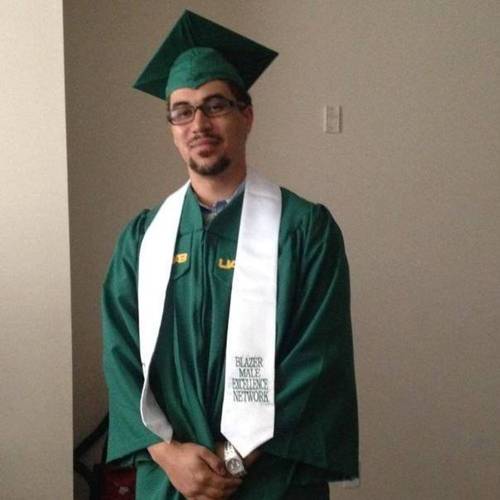 Cory Ford was convicted of Robbery in August 2005 as a teenager. Since his release in 2007, Cory Ford has shown tremendous strides, not only in remorse, but in turning his life around. Cory Ford would go on to attend college at the University of Alabama at Birmingham, where he would receive his Bachelor's of Arts in Sociology. During his time at the University of Alabama at Birmingham, Cory would become a leader in the classroom and on campus. In Spring 2012 Cory Ford was named to the Dean's List in which he accomplished a 3.75 GPA. During his years in school, Cory also served on a number of school programs. He worked with the Multicultral and Diversity Programs where he served as the Director of Race and Ethnicity and a student programmer. In his role, Cory oversaw and participated in the Free Food For Thought program. Cory also served as a Peer Mentor with the Blazer Male Excellence Network, where he would use his past experience to be a teaching tool for young men, in order to help them realize their potential. Academic accomplishments would not be all that Cory Ford would strive for, never forgetting the mistakes that he made, Cory also volunteered in the community, working with Habitat's for Humanity, The Ronald McDonald House and also speaking at the Birmingham Juvenile Justice Center. With all that Cory has worked to accomplish and all the change that he has made, he still remains unable to put his past behind him. In addition to his accomplishments, Cory is step father to 3 lovely children ages 5,13 and 17 with aspirations to get married to his fiance. Even with all the positive change he has done, he is still unable to locate a job due to his past and finding housing is just as daunting for him. Cory is filing for Executive Clemency from the Governor of Ohio to pardon him for his past as he seeks to continue the changes he has made. I ask that you please see it in your heart to sign this petition in support for Cory Ford, and for all that he was worked towards. If the true reason of incarceration is rehabilitation, then has Cory not shown that and more? Please find it in your heart to support this young man and as he seeks to close a long forgotten chapter in his life.