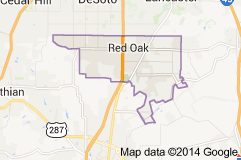 A lot of people are unaware that there are over 150 homes in the city limits of Red Oak and 100’s more in the city’s ETJ (which means City of Red Oak can annex at any time) are in another school district.

A few years ago those 150 homeowners, who pay city taxes and support the community, did a petition to annex into Red Oak ISD. Their kids play sports, go to church and are involved in other community activities here in Red Oak. At that time, the school board decided to go with a Interdistrict Transfer policy. This policy was to allow students residing within the boundaries of Ellis County and/or the city limits of Ovilla and Glenn Heights, but not within the ROISD District boundaries, to transfer into the District if they met certain guidelines.

This summer several of the local Red Oak kids who have been going to ROISD under this policy have been kicked out due to something as simple as them making a 74 semester grade in one class or barely failing a state assessment test, which was not mandatory to pass in the first place. The comment from school officials is they are trying to make room for several new homes being built in Red Oak. This is not fair to those who are already here in the city limits.

We believe ROISD should allow unrestricted open enrollment for all the kids who live in the Red Oak city limits and its ETJ- (ETJ means RO can annex it, and is usually ½ to 1 mile from city limits line) over other students who reside in other cities like Ferris, Ovilla, Glen Heights, Waxahachie, Palmer and Midlothian etc.