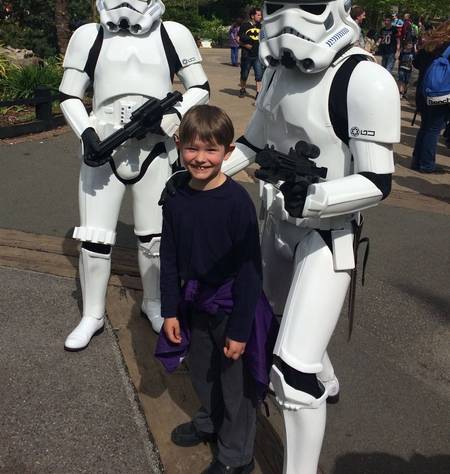 3288 people have signed this petition. Add your name now!

When we found out I was pregnant with a boy 8 years ago my husband Dirk immediately started planning on how to introduce our boy to the star wars movies. We even considered calling him Lucas just so Dirk could say 'Luke I am your father'. Long story short, we named our son Thomas and started with episode IV, the way Dirk enjoyed it as a boy.

Our first trick or treat together we decided to dress Thomas as Yoda.

When we found out the new movie was coming we were all so thrilled. The guys even celebrated Star Wars day at Legoland.

This december would mark the first time Dirk and Thomas would be able to go and see the magic of Star Wars in the movie theater together. Dirk is terminally ill with cancer and he is in hospice care. We have our tickets for the pre premiere in Belgium on December 16th, my son has his costume ready and all my husbands family and friends are going. Sadly, we just received that Dirk does not have that much time left.

I know Mr Abrams has granted private at home viewings for terminally ill people before. We have been trying to contact Mr. Abrams with this request, unsuccessfully so far.

I am hoping our pleas can be heard through this channel. Watching the new movie with our son is only item left on my husbands bucket list.