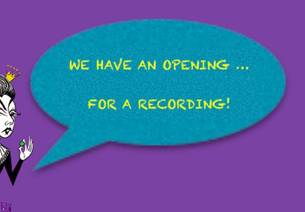 We have an Opening ... for a RECORDING!

One of the most refreshing, unique and lively scores of Mary Rodgers' classic Broadway musical "Once Upon a Mattress" has been delighting audiences each and every night via the Transport Group Theatre Company ever since November 23 at the Abrons Arts Center in New York City; but it is scheduled to close on January 3, 2016 ... and with it: the original cast recording sound.

Much of the success due to this latest production lies in the brilliant orchestrations and musical direction by Matt Castle & Frank Galgano. Not to mention the nonpareil character portrayals of such phenomenal actors as Jackie Hoffman, John "Lypsinka" Epperson, Cory Lingner, Zak Resnik, and Jessica Fontana ~ just to name a few.

This production of "Mattress" is unlike any other in comedic deliverance, musical interpretation and solo and ensemble performance. It would be a travesty to allow this production NOT to be recorded. It must be heard! There are just too many good musical elements in this show both from cast and conductor that would, could and should impress such new and inventive ideas upon troupes and companies across the musical world that otherwise wouldn't without a recording.

Please help send a positive message by signing this petition! Lend your signature in support of such greats as Jackie Hoffman and John "Lypsinka" Epperson, the creative team of Castle and Galgano, and the entire cast ensemble of "Once Upon a Mattress" at the Transport Group Theatre Company. With your help, we can create a public outcry that will - hopefully - grab the attention of the original producers and backers of the show loud enough for them to say: "I'm in love with a score named: MATTRESS! ... let's record it!"

Thank you! Just add your name, email and a few comments if you so choose ~ that's it! and please: spread the word! Flood the internet and collect as many signatures as you can get! The goal? 5000! The end results will be passed along to those who will know what to do with them!

Disclaimer: This petition has been individually started by a sole participant - a fan - completely separate and not connected in any way to the Transport Group Theatre Company, its affiliates, the Cast of "Once Upon a Mattress" or the Abrons Arts Center.