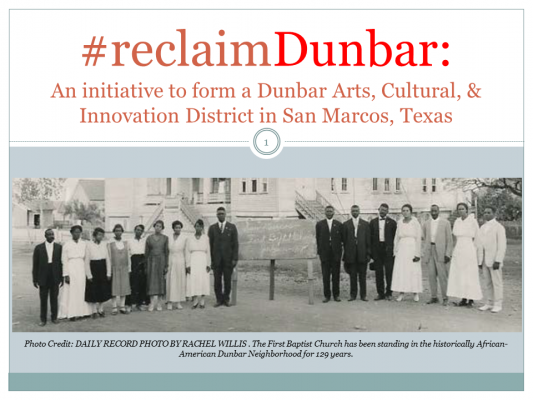 Petition in Support of the Dunbar Arts, Cultural and Innovation District

The historic African American Dunbar neighborhood, which was once marked as “a thriving community”, has been shattered by segregation, outmigration, business closures, demolished buildings, and gentrification. For over a century, this community has faced numerous barriers to preserving its own history, arts and culture, and overall economic prosperity. A Black cultural district in the historic Dunbar neighborhood would afford the opportunity to preserve African American culture while addressing specific needs, promoting business and job creation, preserving/reusing historic buildings/sites, and promoting tourism in the Dunbar neighborhood.

We, the undersigned, are concerned citizens who urge our City Council to support the formation of a Dunbar Arts, Cultural and Innovation District by the following actions.

1. Resolution in support of an application to the Texas Commission on the Arts to obtain a State Designation.

2. Amendment to Ordinance No. 2003-21 to expand boundaries of the Dunbar Historic District to include the entire Dunbar neighborhood.