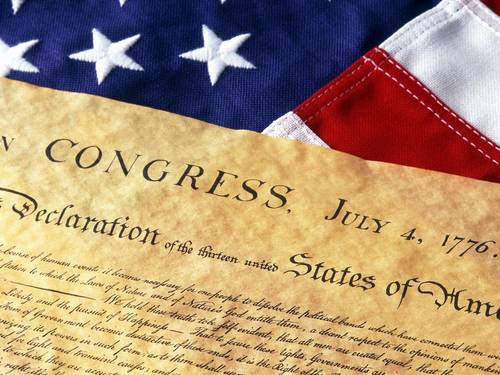 Reasserting The Declaration of Independence

If you are interested in preserving American liberty please join our cause. This is a nonpartisan, peaceful movement dedicated to the pursuit of truth, justice and liberty for all Americans. Please read Reasserting the Declaration of Independence (below) and sign the petition. Share it with fellow Americans and spread the good message that we the people of the United States of America will preserve and protect the rights and liberties of this great nation. We demand accountability and the redress of grievances as stated in Reasserting the Declaration of Independence September 11, 2015.

We the People of the United States of America shall never forget the wisdom and sacrifices of our Founding Fathers ….

“May it be to the world, what I believe it will be … the signal of arousing men to burst the chains … and to assume the blessings and security of self-government. That form, which we have substituted, restores the free right to the unbounded exercise of reason and freedom of opinion. All eyes are opened, or opening, to the rights of man. … For ourselves, let the annual return of this day forever refresh our recollections of these rights, and an undiminished devotion to them.” Thomas Jefferson (1743-1826)

“Liberty cannot be preserved without a general knowledge among the people, who have a right…and a desire to know; but besides this, they have a right, an indisputable, unalienable, indefeasible, divine right to that most dreaded and envied kind of knowledge, I mean of the characters and conduct of their rulers.” John Adams (1735-1826)

“The preservation of the sacred fire of liberty, and the destiny of the Republican model of Government,are justly considered as deeply, perhaps as finally staked, on the experiment entrusted to the hands of the American people.” George Washington (1732-1799)

Reasserting the Declaration of Independence

As a Nationwide Assembly Commencing this September 11, 2015

We the People of the United States of America due hereby declare:

The Constitution and laws which preserve and protect the liberty of the American people, and the Republic which unites them, must not be weakened by the actions of its leaders; and, the conduct and character of its current elected officials must be held accountable to the same standards of law as applies to those citizens for whom they serve.

As asserted by the Founding Fathers July 4, 1776: When in the course of human events, it becomes necessary for one people to address the political bands which have connected them with another, and to assume among the powers of the earth, the separate and equal station to which the laws of nature and of nature's God entitle them, a decent respect to the opinions of mankind requires that they should declare the causes which impel them to address the threats to its nation.

We hold these truths to be self-evident: That all men are created equal; that they are endowed by their Creator with certain unalienable rights; that among these are life, liberty, and the pursuit of happiness; that, to secure these rights, governments are instituted among men, deriving their just powers from the consent of the governed; that whenever any form of government becomes destructive of these ends, it is the right of the people to alter or to abolish it, and to institute new government, laying its foundation on such principles, and organizing its powers in such form, as to them shall seem most likely to effect their safety and happiness.

Prudence, indeed, will dictate that governments long established should not be changed for light and transient causes; and, accordingly all experience hath shown that mankind are more disposed to suffer while evils are sufferable than to right themselves by abolishing the forms to which they are accustomed. But when a long train of abuses and usurpations, pursuing invariably the same object, evinces a design to reduce them under absolute despotism, it is their right, it is their duty to throw off such government, and to provide new guards for their future security. The recent history of the present Republic is a history of repeated injuries and usurpations of the law, all having in direct object the establishment of a systemic financial and political tyranny over the United States of America.

Accordingly, let it be known to the President of the United States and appointed officials in the Executive Branch, as well as to the Republican and Democrat leadership of the Legislative Branch, that repeated injuries and usurpations of the law by the President and his appointed leadership have had the direct and intolerable impact of harming the freedom, security, liberty and pursuit of happiness of the American people.

To prove this, let facts be submitted to a candid nation.

He has refused to assent to laws, the most wholesome and necessary for the public good and national security.

He has forbidden that officials in his cabinet be held accountable for violations of laws.

He has used Executive Orders to circumvent the Constitution with total disregard for national security.

He has empowered enemies of the United States of America which has resulted in the death of Americans and the destruction of U.S. facilities.

He has obstructed the administration of justice and empowered a corrupt Department of Justice to engage in selective prosecution and despotism.

He has endangered the Republic by obstructing the laws for naturalization of foreigners; and, by encouraging their illegal migration hither.

He has made judges dependent on his will alone, for the tenure of their offices, and obfuscated the Judiciary.

He has erected a multitude of new offices, and sent hither swarms of officers to harass the American people through taxation and the policies and corrupt behavior of the Department of Treasury.

He has allowed private financial interests and the privately owned Federal Reserve Bank to affect adversely the security and safety of the Nation through debt-based fiat currency, while plundering the wealth of the American people and saddling generations to come with unbearable national debt.

He has affected to hide despotic actions by claiming national security and muzzling officials who would otherwise speak the truth.

He has engaged in war under false pretense and deceptive practices, empowering the rise of enemies of the United States of America.

He is, at this time, empowering foreign mercenaries to complete the works of death, desolation, and tyranny already begun with circumstances of cruelty and perfidy scarcely paralleled in the most barbarous ages, and totally unworthy of the head of a civilized nation.

He has excited divisive domestic anger which breeds racial, ethnic, religious, social and economic hate among us.

In every stage of these oppressions we have petitioned for redress in the most humble terms; our repeated petitions have been answered only by repeated injury. At present, a President and Congressional leaders, whose characters are thus marked by every act which may define a tyrant, are unfit to govern a free people.

As a consequence of the foregoing and with a firm reliance on the protection of Divine Providence: We the people of the United States of America, in nationwide assembly, appealing to the Supreme Judge of the world for the rectitude of our intentions, do, in the name and by the authority of the good people of these United States of America, solemnly publish and declare that we must hold elected leaders and appointed officials accountable for the innumerable violations of the law; and, we must make redress for the usurpation of the Constitution and the rights of the Free and Independent States by the systemic financial and political tyranny perpetrated by private and governmental interests against the American people which have served to weaken the spirit, independence, and security of this great nation.