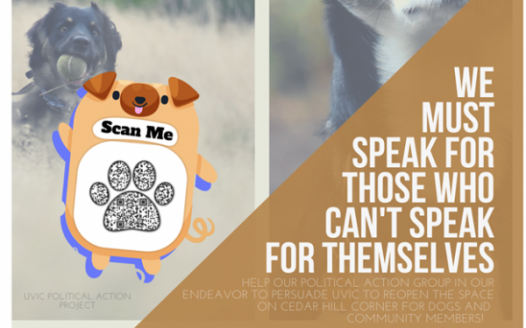 The UVic Dog Park was one of the only genuinely fenced in dog parks on the southwest side of Saanich, with the nearest fenced dog park (Pemberton Park) is 6 kms away and just over a hectare in size. Some small parks in the Greater Victoria Region have off-leash areas dedicated to allow owners to let their dogs “run free” though these typically aren't fenced in and near roads and traffic. Most parks however are not “dedicated” off leash dog parks and other recreational users are often quick to remind dog owners that their dog must remain on its leash. The conflicting values between non-dog owners and dog owners is an age old tale, especially in Victoria. The UVic dog park was a space specifically for dogs, fenced in, in central Saanich close to the University, Cadboro bay and a large part of the population of Victoria. In the event that UVIC restores the Dog Park and allows public access once more, there would still be a shortage of dog friendly green space.