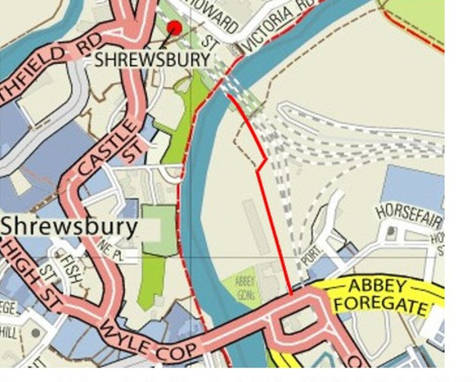 The path links Abbey Foregate with platform 3 of the station which itself extends across the River Severn railway bridge. This was a station access used when matches were played on the old Gay Meadow football ground – now Riverside Meadow housing.

There have been attempts over more than 10 years to re-open this path. The scheme has been persistently opposed by Arrival Trains Wales (ATW), the current train operator, who would prefer to keep the single station entrance for ease of operation. Their franchise expires in October 2018. During the first half of 2017, the four shortlisted bidders (Arriva Rail Wales, Abellio Rail Cymru, KeolisAmey and MTR) are preparing their final bids in the run-up to submission in July. There is a short window of opportunity to convince bidders to include the re-opening of this second station access.

Here is the case for re-opening the footpath as an access to the station from the south east:

We urge Shropshire Council and the Marches Strategic Rail Group to take the lead in pressing franchise bidders to open this second station entrance.