1543 people have signed this petition. Add your name now! 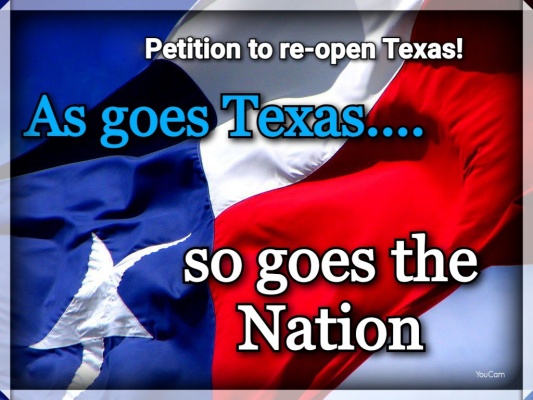 Neither the wisest constitution nor the wisest laws will secure the liberty and happiness of a people whose manners are universally corrupt. ~Samuel Adams

Petition to Re Open

WHEREAS we recognize the seriousness of the coronavirus (COVID-19) and the need to take strong personal actions to combat its contagion and understand that governments job is to protect those personal liberties,

WHEREAS the projected numbers for death and viral spread have been reduced and we believe this viral threat is being used for political weaponry against citizens as no other contagion including H1N1 has ever been used to shut down business or restrict civil liberties,

WHEREAS Governors, mayors and county sheriffs across the nation are declaring states of emergency under the guise of protecting the public from the coronavirus,

WHEREAS Texas is a sovereign State and by right of the 10th amendment shall be free to make decisions regarding government that would suit Texas better than relying on the Federal government for bailouts and Federal assistance,

WHEREAS these emergencies have been declared without respect to Civil Liberties contained in the First, Second and Fourth Amendments, and 10th amendment,

WHEREAS the right to peaceable assembly has been nullified by limiting to very small groups and in some cases declaring that violators will be fined and/or incarcerated,

WHEREAS churches are being forced to abandon physical assemblies in favor of online broadcasting that is not available to a vast number of smaller churches in America,

WHEREAS our 1st Amendment is being violated regarding our right to file grievance, petition and speak to our local government. This right is restricted by said emergency orders and in violation of our municipal code #Section 551.043(a) which states the general time requirement as follows:

WHEREAS the terms “essential” and “non-essential” are not valid terms considering ALL business that supports a person or families ability to feed, clothe and support said person or family should be considered essential.

WHEREAS because our government has adopted the terminology “essential” and “non-essential” businesses are illegally being forced out of business because of mandated closure for indefinite periods of time,

WHEREAS the Second Amendment is being violated when government executives, using unchecked power granted them to combat the spread of the Coronavirus, use that power to deny citizens their right to purchase arms and/or ammunition,

WHEREAS the Fourth Amendment is being violated when citizens are not secure "in their persons, houses, papers, and effects, against unreasonable searches and seizures [that] shall not be violated",

WHEREAS all of these actions are preventing citizens from exercising their Unalienable Rights as guaranteed in the Declaration of Independence, including the right to Life, Liberty and the Pursuit of Happiness,

WHEREAS all elected leaders take an oath to God to "support and defend the Constitution of the United States",

THEREFORE the signers of this petition demand that all civil and/or elected officials who have issued any type of executive order or emergency declaration in relation to the coronavirus, rescind any and all orders that violate any portion of the Bill of Rights. including the First, Second and Fourth Amendments. Furthermore, we demand that all future orders will not violate the U.S. Constitution and that oversight be exercised to ensure that this does not happen either intentionally or inadvertently.