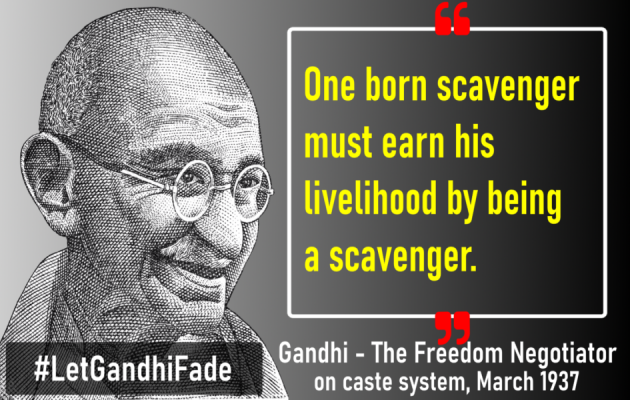 To The Honorable President of India

We the undersigned bring this petition to you for reevaluation of legacy of Mohandas Karamchand Gandhi aka Mahatma Gandhi. Mr. Gandhi is one such person who still wields huge influence in public mind, especially in India. Unfortunately, this influence has been carefully crafted to serve some vested interest. History tells us very different story. But that part of the story is never taught in schools and colleges, hardly ever discussed in prominent media discourse. It severely distorts the history of Indian independence struggle. Influence of this lobby completely overshadows ultimate sacrifices made by thousands of revolutionaries, INA soldiers, Navy revolters and many more. Most importantly it robs off the pride from the mind of the common citizen of India by making them believe that we got independence by toeing line with our colonizers and by some non-violent negotiation tactics. Again, history tells us something very different. All this has been done by glorifying one person who is also christened as ‘Mahatma’ and ‘Father of the Nation’. The life of the same man tells us that his life was anything but ‘Mahan’ or great. This much falsification of history pains me to the core. Due to that, I tried to bring forward real Gandhi in front of everyone that have been mostly confined to the academic circle till date.

My analysis is captured in following article and YouTube video:

We also have following demand to the Indian government after the government does the due diligence of this overblown legacy.

2. Stop erecting new statues of Gandhi and prepare a plan to replace existing ones in future.

3. Drastically reduce Gandhi and Congress from all History books. Include other freedom fighters. States should highlight their local heroes.

4. Remove Gandhi's picture from the Indian currency notes and replace with other national heroes. There could be more than one personalities.

5. Officially remove the words 'Mahatma' and 'Father' of the Nation from all government texts.

Many groups around the world have become aware of the true history and they already started movements against Gandhi’s legacy. One such example was removing Gandhi’s statue from Ghana University in 2018. Unless we, Indians, rectify our course of action, and keep projecting Gandhi as part of brand India, we will see ourselves defending something indefensible.

Thank you for your time and prudence in this regard,

I have done some study and analysis in regards to M. K. Gandhi’s life and contemporary Indian history that I have documented in the article and YouTube video mentioned above. I sincerely request you to go through these. I have tried to keep it concise as much as I could. Many books are written on each of the aspect I tried to highlight. So, you can understand how much history is deliberately kept hidden from us. I have given some book references at the end of my article. While watching the video, I request you to pause it at relevant places as I have provided lots of supportive content in parallel to the main narration.

1. Stretcher Bearer – Gandhi in South Africa and his views on native black Africans

Here I am only providing some of Gandhi’s quotes on these topics. I again request you to go through the article and video because my article/video is itself very short compared to the related historical evidences we have. Hence, change.org website real estate is way too small to even provide glimpse on the topic. Once you go through the article/video, I leave it to you if you want to sign this campaign.

Gandhi abusing black Africans: “Kaffirs (referring to the black Africans) are as a rule uncivilised – the convicts even more so. They are troublesome, very dirty and live almost like animals... The reader can easily imagine the plight of the poor Indian thrown into such company!” (3rd July 1907, Ref: CWMG Vol 8)

Gandhi requesting British government to give military training to the Indians in South Africa to fight against native Africans: “If the Government only realised what reserve force is being wasted, they would make use of it and give Indians the opportunity of a thorough training for actual warfare.” (18th November 1905, Ref: CWMG Vol 5)

Gandhi justifying hereditary, caste-based occupation: "one born a scavenger must earn his livelihood by being a scavenger, and then do whatever else he likes.” (6th March 1937, Ref: CWMG Vol 71)

Gandhi on inter-dinning, inter-marriage of castes: "It [caste system] is merely an agency for ensuring self-control... We do not associate with members of other communities for eating or enter into marriage relationships with them. With an arrangement of this kind, there is a good chance that loose conduct will be kept down." (October 1916, Ref: CWMG Vol 15)

Gandhi on women education: "Home life is entirely the sphere of woman and therefore in domestic affairs, in the upbringing and education of children women ought to have more knowledge. I do not believe in women working for a living or undertaking commercial enterprises. To introduce English education in schools meant for women could only lead to prolonging our helplessness." (20th February 1918, Ref: CWMG Vol 16)

Gandhi on birth-control and woman sexuality: "Contraceptives are an insult to woman hood. The difference between a prostitute and a woman using contraceptives is only this that the former sells her body to several men, the latter sells it to one man.” (5th May 1946, Ref: Harijan, Vol 10)

Gandhi called Madanlal Dhingra a coward: "Mr. Dhingra's statement, according to me, argues mere childishness or mental derangement...In my view, he has acted like a coward...No act of treachery can ever profit a nation". (14th August 1909, CWMG Vol 9)

Gandhi opposing Naval Mutineers in 1946: “This mutiny in the navy and what is following is not, in any sense of the term, non-violent action....Burning of tram-cars and other property, insulting and injuring Europeans is not non-violence of the Congress type, much less mine... As it is, they are setting a bad and unbecoming example for India.“ (23rd February 1946, CWMG Vol 89

Gandhi calling Hindus coward that too after Hindu genocide in the hand of Moplahs during Khilafat Movement: "My own experience but confirms the opinion that the Mussalman as a rule is a bully, and the Hindu as a rule is a coward. Need the Hindu blame the Mussalman for his cowardice? Where there are cowards, there will always be bullies... But as a Hindu, I am more ashamed of Hindu cowardice than I am angry at the Mussalman bullying." (29th May 1924, CWMG Vol 28)

Gandhi after Muslims were killed in Bihar riot: “Hindus in Bihar have committed a grave error, they have been very unjust to Muslims. Hence they should do their duty by contributing to a fund for the relief of Muslims by way of repentance.” (8th March 1947, CWMG Vol 94)

Gandhi on the idea of independent India: “Medical science is the concentrated essence of Black Magic. Quackery is infinitely preferable to what passes for high medical skill...Hospitals are the instruments that the Devil has been using for his own purpose, in order to keep his hold on his kingdom. They perpetuate vice, misery and degradation, and real slavery…India's salvation consists in unlearning what she has learnt during the past fifty years. The railways, telegraphs, hospitals, lawyers, doctors, and such like have all to go…Indians should wear no machine-made clothing, whether it comes out of European mills or Indian mills…England can help India to do this, and then she will have justified her hold of India.” (14th October 1909, CWMG Vol 10)

Gandhi making false promise of getting independence in one year and called everyone to donate in a Rs. 1 crore (equivalent to Rs. 1170 crore in 2021) fund drive to attain this goal: "If there is a sufficient response to my scheme, I make bold to reiterate my statement that you can gain swarajya in the course of a year," (8th September 1920, CWMG Vol 21)

Read/watch the article/video to know what his excuse was when his lies fell flat after one year.

97% of NCERT Grade 8, 10 and 12 history books are dedicated to Gandhi and Indian National Congress. Only 3% of the material can be found for other freedom fighters like Netaji and Bhagat Singh. I have provided charts and further data points in the article/video.

Next step / What you can do:

2. Talk to your local MP, MLA, Councilor about how you can encourage celebrating your state's freedom fighters and other true heroes of this nation

3. Talk to your education board to bring required changes in the history books

4. Until history books are changed, encourage students to read various books to get a balanced view

5. Read about our history yourself from variety of books. Historian’s job is to provide facts, not feed opinions. Readers should form opinions based on facts. Unfortunately, section of India’s prominent historians failed miserably in this aspect. Don't let paid historians with hidden agenda influence your judgement.