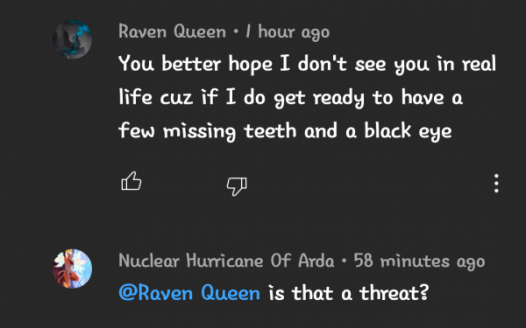 Have the youtube staff terminate raven queen and her cyberbullying channels.

As Youtuber, I wish to make the environment for my fans safe, when Youtube fails to follow their own rules and take channels down that are offensive. As such, I have witnessed my audience being harassed by the individual named Raven Queen Omega, whose channel is still up, despite that she keeps violating Youtube Guidelines with her videos, mainly Bullying and Harassment.

Domestic violence and being homophobic

Cyberbullies kids and threatens them with harm, such as in one of her videos, she threatened to beat someone's ass

Threatened her 'Haters' with knives and blender blades

Neary committed manslaughter, as Youtube user named Robonino has heart and lung problems and she harassed him to the point that he nearly died

YouTubers that have called her out are test the femboy eve, Aurora Snowstrider/Caleb Skywalker (Same individual) and The Dark Reindeer, which all were threatened by Raven.

By allowing Raven Queen Omega to stay on Youtube, they normalise cyberbullying, which is against their message that they want their platform to be safe. Please sign the petition and share it, as we must stop Raven Queen before she kills someone else with her bullying!