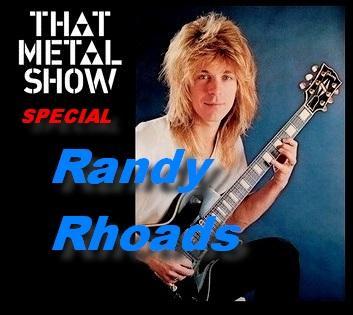 Get a Randy Rhoads Special episode on 'That Metal Show'

1688 people have signed this petition. Add your name now!

This petition is created to get a special episode aired in memory of the late, great Randy Rhoads on VH-1's THAT METAL SHOW.

We are happy to announce that that a collective and united effort has been initiated - to get Randy Rhoads his very own TV special via an episode of THAT METAL SHOW on VH1.
Randy Rhoads was and continues to be a driving influence on popular music - whether it be on those who play hard rock /metal, alternative and in some cases country. It's only fitting that Randy be featured on an episode of the popular TV program - whose guests are often those directly influenced by Randy.
So, to accomplish this, we are asking you to sign our online petition. Once we have a large number of signatures - it will be presented to the hosts of that program.
Thank you
Randy Rhoads Fans, Students, Friends, Admirers
We the undersigned feel it is long overdue that such a respected musician is missing from the broadcasts. Randy was a major influence on those musicians that are regularly featured on that program. Where would metal music be without Randy Rhoads?