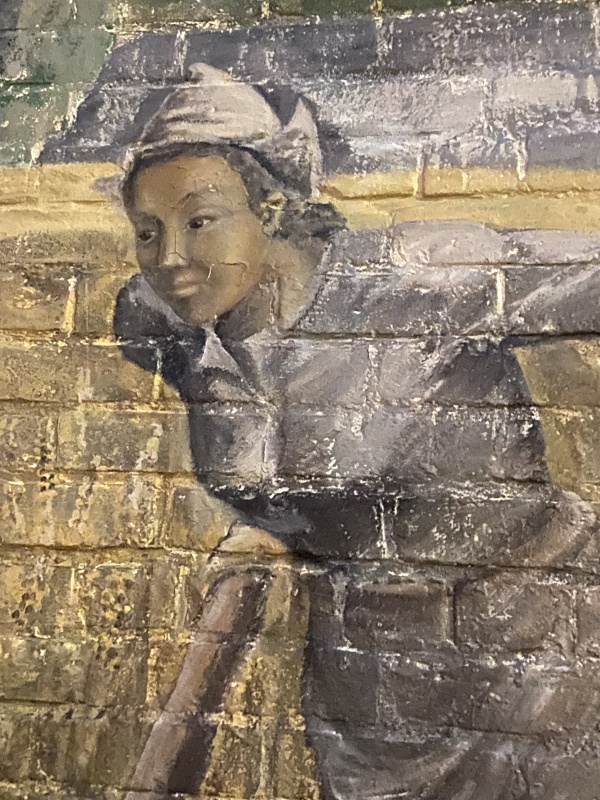 The purpose of this petition is to ask the Village and Town of Red Hook, it’s businesses and citizens, and friends in this corner of the Hudson Valley to confront small town racism, and voice their support in dismantling systems of institutionalized oppression. The mural ‘Harvest Past’, located in the center of town, is one of several that depict harmful imagery that negatively affects the people of color in our community on a daily basis. We are not asking for a blank wall. We are asking the people in power to let the future take us forward by supporting and sponsoring the partial redesigning and repainting of the mural.

Location and Description of Image

The mural ‘Harvest Past’ is located at the intersection of routes 199 and 9 in the center of Red Hook, NY 12571. The background shows a landscape with rolling hills and blue skies, wheat fields, trees, a Livingston’s mill, and one person working with the wheat. In the foreground, a woman of dark brown complexion wearing no shoes, and a dress and bonnet pushes a cart of apples.

In collecting your signatures of support on this petition we aim to have the mural partially redesigned and repainted to remove harmful imagery. We recognize the history of slavery in the mid Hudson Valley and assert that there is no alternative context that can explain away the racism felt by the people of color who live in and interact with the town.

The image should still represent the Hudson Valley now and into the future. In the pursuit of that representation the work should be done collaboratively and should be led by black, indiginous, and other peoples of color in our community.

Here’s more. The original art for ‘Harvest Past’ can be viewed, along with other muralized works by following link [4] listed below. The scene, set between 1700 and 1825, shows a Livingston’s mill in the background, a wheat field, and a figure described as a Dutch settler in the foreground pushing a cart of apples. The wheat signifies our past as major flour producers, while the apples represent our future.[1] This was the artist's intent, however this is not the perception of many who interact with Red Hook every day.

To the casual viewer it is lacking in historical context, and without it, the woman in the image can only be seen as a slave. She is wearing a servants uniform and is working with no shoes. Not only is the imagery easily interpreted as a representation of slavery, it was once observed by a visitor to the Livingston estate that this is how the African people owned by Robert Livingston were dressed. [5] Furthermore, if the woman is indeed a Dutch settler, then the depiction is historically inaccurate. In the early 1800s families in the area and across many parts of the country began being referred to as “Black Dutch”. This is the term used by a number of our community to defend the skin tone of the woman in the mural. The appropriate term for African Dutch people is Afro-Dutch, “Black Dutch” is a 19th century slur used to describe White Dutch or English people of mixed German, Indigenous American, or Spanish heritage. [2]

Here are the facts. In the early 1700s this part of the Hudson Valley produced a lot of wheat. The Livingston family, though primarily merchants, had landholdings across what is now Livingston, Clermont, and Montgomery Place. [1,3,5] At the time when the Livingston family had their land primarily invested in milling of wheat for flour, the family’s estates profited off of the labor of slaves.

The Livingston name came into money as the result of a late 17th century marriage between Robert Livingston and a wealthy widow. Robert acquired the first 160,000 Livingston family acres from the governor of New York shortly thereafter. The family grew, with Robert as its head by investing heavily in fur trading and the buying and selling slaves, sugar, and tobacco between Africa, the Carribean, and New York. After his death in 1728, Robert’s children expanded the family’s landholdings to encompass a massive 1 million acres and 5 of his sons became merchants. Robert’s son Philip Livingston invested in the family’s slave trading exploits with apparent relish. Sometimes using a ship called ‘The Wolf’ Philip made or invested in 15 of the 17 total slaving voyages orchestrated by the family. The voyages were devastating to the enslaved, with enormous loss of life occurring due to disease and at the hands of slavers. The Livingston family has a rather well documented history of slave ownership from the 1700s to the 1820s. For a time they were considered the most prominent slave trading family in the entire state of New York and held ties with Jamaican plantations and slave brothels in Manhattan. [5]

The Livingstons were not the only family to own, buy, and sell slaves in the Hudson Valley. Between the late 1600s through much of the early/mid 1800s colonists and their descendants relied on slaves to make this area grow. [6] To muralize this kind of imagery glorifies slavery and considering that slavery was the foundation of growth for the area makes this glorification reprehensible. It is time to listen to the people of color in our community, it is time to confront white supremacy in all forms; it is time to let the future take us forward.