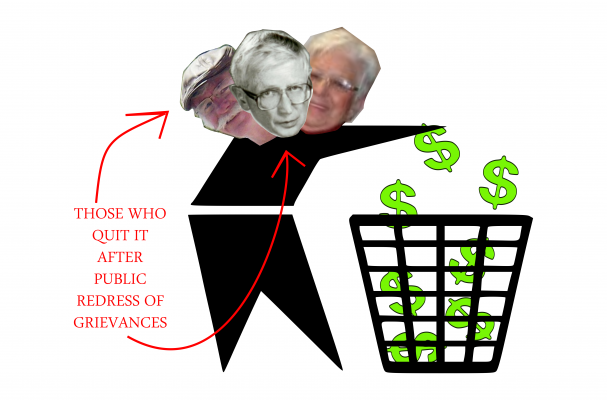 Quit it with the Lawsuit

UPDATE >> This petition now reflects important changes. The PEOPLE of Honesdale (including all of you who've signed this petition already) don't like being bullied and decided to change this story. A distraction'ary tale about certain community members trying to divide us has been flipped upside down. A new story of local empowerment and civic engagement is being told. Many folks attended and spoke out against these non-neighborly actions at a H'dale Borough Council meeting on March 12, 2018. Less than 24 hours later, this frivolous lawsuit was amended. Council members Brennan and Jennings removed themselves as plaintiffs. Participation in local government, in all ways, shapes, and forms can make a difference. Elected officials do NOT sit high and untouchable above the public. They represent the people. Power to the people. << UPDATE

Honesdale Borough Council members James Brennan Jr. and Robert Jennings filed suit against the council they're members of (THEY HAVE SINCE REMOVED THEMSELVES FROM THE LAWSUIT, GREAT JOB EVERYBODY!) They've done this with and in support of former council member Juanita Pisano (WHO IS NOW SUING COUNCIL SOLO.) See original article here >> http://thetimes-tribune.com/news/lawsuit-challenge...

The belief is that Pisano (who received a 3 to 3, tie vote) should have filled a vacancy on Borough Council instead of another candidate who received a majority (4 to 2) vote and was subsequently appointed. There may also be an enjoyment of tossing away of public resources and time in defense of this lawsuit at hand. On the surface, the lawsuit is about rules of order but it seems more personal**.

This seems fishy. Perhaps even petty, competitive, self-serving, lame, and not in the public interest. Honesdale Borough HAS ALREADY expend unnecessary legal funds in defense of this lawsuit and that's an offensive notion.

Do you like to build things up instead of tearing things down? Are you connected to Honesdale by residency, economics, tax payments, or a love of place that litigious neighbors don't share?

Sign this petition if you think JUANITA PISANO should go to the corner for bad behavior and should drop this lawsuit. JAMES BRENNAN AND ROBERT JENNINGS GOT THE MESSAGE BUT WE AND VOTERS SHOULD REMEMBER THAT THEY BROUGHT US HERE TO BEGIN WITH.

Full disclosure, a letter to the editor in reply to the news link at the top was penned by this petition's author and can be found here >> https://drive.google.com/file/d/1rcj4H598hMEI2Dbjx... AND text version of words delivered during public comment at the March 12, 2018 H'dale Borough Council Meeting can be found here >> https://drive.google.com/file/d/1b6YIo5Djlxi3ozU_d...

**Raw audio from the meeting to appoint a new council member reveals the following, directly after Councilor Canfield voted Yes to the Rivera nomination. The roll call vote proceeded to Councilor Brennan.**