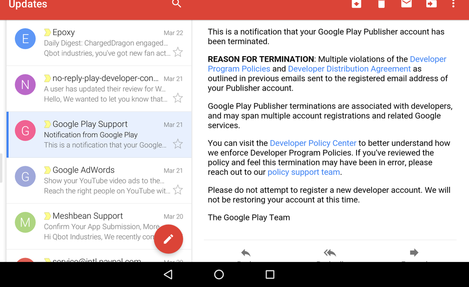 Google's Playstore is very hard on Small developers. They have a automated system that suspends apps and developer accounts for the smallest of things one of these is for your app icon or title slightly resembling another apps. If your app is suspended you dont have the chance to change any issues that caused the suspension your just stuck with the strike on your account. If you make three of these mistakes then you loose your account. Once your account is terminated you cannot make a new one as Google will automatically terminate the account! This means that for a simple mistake of a app submitted with a icon resembling another app or brand you can loose you whole account and never release apps again!!

This has caused many apps and developers to be suspended. Among these developers is Qbot Industries. He is a Minecraft Pocket Mod developer who lost his account on Tuesday 22nd of March 2016 and because of this he can't follow his dream of becoming a Famous app developer. Please help us resolve this issue with Google plays harsh Automated termination system, give developers a chance to fix issues with apps instead of just suspending them and give the small app developers a voice!