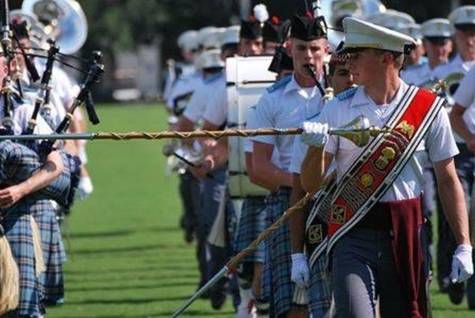 Put The Citadel Pipe Band Back In Front

We, the undersigned, request you restore The Citadel Regimental Band and Pipes to its traditional formation position. The Citadel Pipe Band—with its distinct and motivating sound, and its distinct uniforms—should march separately and leading the band, where the Pipe Band has marched for more than half a century. We believe the recent and radical change to this formation has caused more problems than it could ever resolve. The intermingling of bagpipers with regular band members in different uniforms is an eyesore in and of itself, and this exacerbates any otherwise minor drilling error that band cadets might be prone to commit marching at parade or other events. That is, any slight misstep, which might have gone unnoticed, now stands out like a sore thumb with cadets wearing different uniforms marching in one formation. Secondly, pipe bands play best when they play near each other, not mixed in with other instruments. This intermingling unquestionably makes it more difficult for the bagpipers to play together in tune. This is why bagpipe bands in competition generally form a circle in which they can best hear each other and maintain proper tuning. Obviously, marching in a circle formation is impossible. But marching together, as one Pipe Band separate from the Regimental Band, is preferred to dispersing the individual bagpipers throughout another musical ensemble where they will have great difficulty playing in unison as one Great Highland Bagpipe ensemble.

The departure from decades of featuring our Citadel Pipe Band prominently at the head of the Regimental Band and Pipes was the decision of the new Band Director, Lieutenant Colonel Timothy Smith. This change, Smith argues, addresses certain musical phasing problems that arise when the Pipe Band plays tunes combined with the Regimental Band as one musical ensemble. He also claims integrating the bagpipers and the Pipe Band drummers targets problems he’s observed in the band with marching in general. While we appreciate Smith’s courage and initiative, and we do not question his impeccable musical pedigree, we disagree with Lieutenant Colonel Smith. This particular change is not a net benefit to the overall purpose of The Citadel Regimental Band and Pipes. In fact, the evidence suggests this change is ultimately detrimental–musically, optically, and as a morale booster to the Corps of Cadets.

General Mark Clark founded The Citadel Pipe Band in 1955. At the time he remarked The Citadel Pipe Band would be a "great boost for the morale of the corps and will make a hit with cadets and the public." In a Life Magazine article of the same year, his efforts to build upon the success of The Citadel were noted: "in a year, General Mark Clark, veteran of Anzio, Salerno and Korea, has uplifted the morale of an honored century-old military college." The magazine appropriately included with this article a picture of "cadets at a pep rally and the Bulldog team running onto the football field while being serenaded by Gen. Clark's new bagpipe band."

Chief Warrant Officer Millard F. Crary led the Pipe Band at its inception. This Army veteran had studied the Great Highland Bagpipes in Glasgow, Scotland, and he helped found two separate pipe bands in the U.S. Army, both of which were under General Clark's command. Unfortunately, Crary died suddenly on The Citadel campus. His 1960 obituary noted his "appearing in tartan kilt in the van of the pipers, Mr. Crary was the only person not a member of the corps to march regularly with The Citadel cadets." Crary’s successor, Captain Ludovic J. Grant-Alexander, was a native of Inverness, Scotland. Upon learning of The Citadel’s need for Crary’s replacement, Grant-Alexander immediately quit his architectural firm and relocated to Charleston to realize his 30-year dream of leading his own pipe band in the United States. This story of Grant-Alexander’s decision to upend his life and lead The Citadel’s nascent Pipe Band reflects the unique position of The Citadel’s Pipe Band in our country’s history as one of the first collegiate musical ensembles featuring the Great Highland Bagpipe. As one of Grant-Alexander’s first Citadel pipers, William W. Duke (Citadel class of 1966), explained in The News and Courier, the “music of the pipes is probably the most stirring of all types of music. More than once has a piper changed the tide of a battle. Gen. Mark W. Clark thought they were inspiring enough to bring them to The Citadel . . . .”

The Citadel’s Pipe Band was such an integral part of General Clark’s efforts to build on the morale of the Corps of Cadets and to establish the Pipe Band ensemble as a Charleston institution, that he initiated a plan to commission a unique Citadel tartan from Scotland. The process took nearly a quarter century to complete, and culminated in 1979 with The Citadel Board of Visitor’s approval of the tartan on December 10 of the same year. The tartan debuted the following school year. Col. D.D. Nicholson, Jr., then-vice president for development at The Citadel explained the significance of the tartan’s design:

"The college colors are blue and white, which are both featured. The gold stripe represents the brass on the uniforms while the burgundy hue stands for the cadet sash. The symbolism of the colors is ideal aside from their Citadel implications. Blue represents truth, constancy, justice, charity and religious feelings. White stands for purity, perfection, and wisdom. Gold symbolizes excellence, honor, wisdom and majesty. Red is for patriotism, valor, sentiment and liberty."

After Captain Grant-Alexander’s tenure, Major Sandy Jones, an Air Force veteran, led The Citadel Pipe Band. Like his predecessors, Jones was renowned as a top musician in his field. Sandy Jones in fact wrote a book on beginning bagpiping instruction, and is internationally known for his contributions expanding the traditions of the Great Highland Bagpipe to the United States. Sandy Jones acknowledged General Mark Clark’s vision in creating The Citadel Pipe Band, explaining how General Clark “was fond of the pipe bands and felt, when he was in Europe, that some of them did a lot for the esprit de corps in some of these units.” Major Jones’ counterpart for many years at The Citadel, Major Herbert Day—a Marine Corps veteran and The Citadel’s Band Director—commented on the legacy of music General Clark left to The Citadel: “the sound that combines the pipes and the bands is such a blend of perfection that it can’t be copied.”

In fact, this “blend of perfection” led to three invitations for The Citadel Regimental Band and Pipes to appear in the Royal Edinburgh Military Tattoo in Scotland. These invitations were extended to The Citadel despite—or perhaps because of—the manner in which they had played and marched since the Pipe Band was introduced to The Citadel. The Citadel’s bands were the first U.S. military college bands to be honored with such an invitation. Clearly, this indicates the traditional formula for The Citadel has worked to achieve not only the Regimental Band and Pipes’ primary purpose on The Citadel campus of supporting the Corps of Cadets, but this tradition also served to honor The Citadel itself with international renown for its premier military college musical ensemble.

The undersigned petitioners acknowledge change is oftentimes inevitable, and further, change can be used as a catalyst for growth and improvement, especially in military environs. The petitioners are furthermore grateful for Lieutenant Colonel Smith’s resolve to improve The Citadel Regimental Band and Pipes, and we thank him for all of the superb work he has accomplished in his brief tenure at The Citadel. Finally, the petitioners have no desire to micromanage the Band Director’s efforts to lead the Regimental Band and Pipes.

Notwithstanding, the change protested here is such a radical departure that it fundamentally alters The Citadel Regimental Band and Pipes and has, consequently, compelled us to act. Many of us find the current formation an unrecognizable amalgamation in which the Pipe Band has been almost entirely lost amidst other instruments. While we may not be musical professionals with post-graduate musical degrees, we submit the principal audience of The Citadel’s Regimental and Pipes are composed of laypersons, like us. In our discussions with a wide variety of people, they concur with our judgment. We find this sweeping change has degraded the appearance and military bearing of the Regimental Band and Pipes in formation. We also find the bagpipes are drowned out musically in this new formation, and no longer appear to be the distinct musical ensemble General Clark envisioned in creating The Citadel Pipe Band. This is not about micromanagement of day-to-day band affairs. This is about preserving the fundamental tried-and-true quality and nature of The Citadel’s Regimental Band and Pipes.

Respectfully, therefore, we request action from The Citadel’s leadership. We request you restore The Citadel Regimental Band and Pipes and direct the Pipe Band march in front as a separate musical ensemble where it had marched since Mark Clark first founded our venerable Citadel Pipe Band.