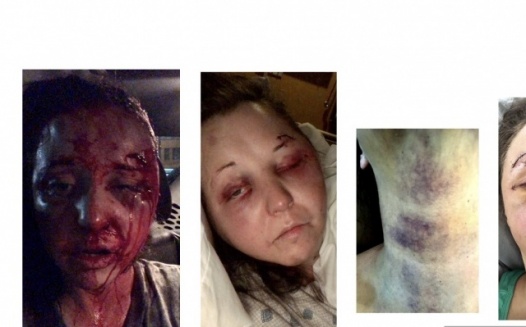 On Memorial Day 2020, I was severely assaulted by a boyfriend at the time. I suffered a brain bleed, broken jaw, and broken neck. He punched me a countless amount of times, choked me until I was unconscious. It is extremely rare to break someone’s neck by strangulation, and my break is so rare that the outcome is usually paralysis or death. He was arrested and charged with, Assault 1, Assault 3, Strangulation, and Domestic Assault for violating after a similar offense within 10 years. He could face some prison time with Assault 1, but if they don’t convict him of that, he could be released on probation with prison time just hanging over his head. This is an absolutely terrifying outcome. He is ex-military, he was trained how to kill people. I.E how he broke my neck by strangulation. He obviously doesn’t care about probation or a restraining order. He violated one twice a few years ago. I have no doubt that he will get out and kill me, or someone else.... I know judges and lawyers want to avoid trial, so they often offer extremely low plea bargains. They say that the victim’s input is important, but honestly, I believe they just say that to make it sound like you matter. I have been fighting tooth and nail to get him the highest sentence possible, but I am scared they will give this narcissistic psychopath a low deal. I’ve done countless hours of research, and I reached out to multiple ex girlfriends of his. I found similar patterns of manipulation, lying, jealousy, anger issues, and even most of them dealt with physical abuse. It is wrong that the court cannot take his past into account just because it isn’t a part of this particular case, or testimonies from exes even. It is a common fact, that most victims of abuse do not come forward out of fear. So why when they finally land in court, why aren’t previous relationships taken into account?

How a brain bleed and a rare neck break, that both could have killed me, may not be enough for Assault One? I’m not sure, but I do know that this man needs to be in prison for not only what he did to me, but his past girlfriends, and possible future victims. So please help me by signing this petition, so I can present it to the court in an effort to get an appropriate sentence for his charges. Thank you in advance for your help.