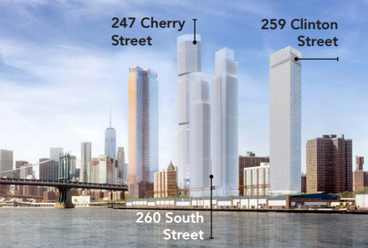 We are a concerned group of citizens, voters, Tenant Association members, some of whom sit on the Task Force and lifelong residents of the Two Bridges area. We are writing you to express our concerns about the relative short period being afforded to our community in order to be informed and provide meaningful feedback about the 3 massive developments planned within a two block area in our back yard.

We believe that real Community Engagement requires an authentic process that sincerely seeks to glean community expression; anything less and people come away feeling used. We believe that effective community engagement takes tremendous time and resources to be done effectively and the benefits far outweigh the costs. Expression that once collected and hashed out to a degree can be focused to shape if not outright stop development that we do not feel suits the community’s needs.

The resident leaders in the Two Bridges community have been engaged in a series of Task Force meetings and phone calls in addition to the tightly scheduled Community Engagement Meetings sandwiched often a week or two in between and this is to say nothing of the series of community meetings that must take place between resident leaders and their constituent membership and other interested members of the community. It should go without saying that most of us have full time jobs and other personal responsibilities to attend to, which brings us to another course of action, we are hard pressed to engage but nevertheless are seeking your respective assistance with.

While we understand that the EIS process requires the developers to conduct these CEM events and conduct the community outreach efforts, many people in the Two Bridges Community simply do not trust this hasty process, efforts or the people (who are employed by the developers). Additionally, we appreciate the efforts of those involved with adopting an ‘Enhanced EIS’ process and to the extent it was meant as a genuine attempt to enhance community engagement we hope you’ll recognize that this letter is in that same spirit. Regretfully, due to the crammed nature of the process and the evolving nature of organizing community sentiment we were unable to express our misgivings with sufficient consensus earlier in the process which we believe is further evidence of a need for more time.

We respectfully have two demands:

As Jane Jacobs states in her book, The Death and Life of Great American Cities, “A successful city neighborhood is a place that keeps sufficiently abreast of its problems so it is not destroyed by them.” We want you (JDS, L&M, CIM, Starrett, DCP and our elected officials) to rectify this otherwise muddled outreach and help us keep our community from being effectively destroyed, after all we are what makes this community. “Somos Siempre Nueva York, we are always New York”; as the mayor said in november, well we wish to remain always who we are in Two Bridges on the Lower East Side. and in order to do so, the community requires more time to be meaningfully included in this process.