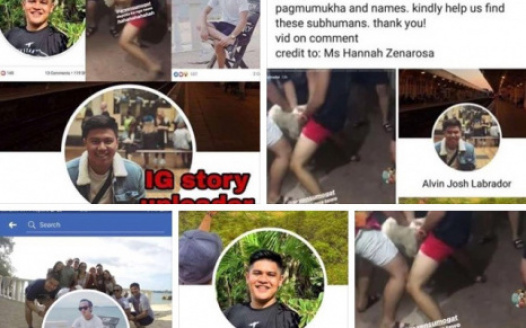 Punish the Subhumans who abused a small dog

We abhor and vehemently protest the actions of bored & intoxicated people either under the influence of drugs or liquor. These people abused a monkey by giving a lighted cigarette and molested a small dog. They danced and held the stressing dog gyrating in frenzy moves. The Maltese dog was tossed away like it was trash in the dark. To this day, the fate of the dog is not known yet. We want these cruel subhumans punished and the teeth of the law on Animal Abuse be meted out on them. R.A. 8485 provides sanctions such cruel acts. “All living things have a right to live on this Earth but, we, very often become, totally, insensitive to their pain, only because animals can’t speak the language of humans, they don’t have a voice.” (Bunty Rane) We condemn the acts made by Raymond Arches, Arxen Sumogat, Alvin Josh Labrador(4th yr PT students at St. Paul’s University) and Marco Alava( West Visayas State University). This happened in Iloilo, Philippines. They brought shame to their universities. Animal cruelty is an act punishable under R.A. 8485(Animal Welfare Act). We strongly demand justice for putting to harm or possibly killing the small dog. The group posted videos of their acts in jest. They flaunted their heinous acts like it was something to be proud of. The social media can easily influence other people. This kind of abuse must stop. Punish them to the full extent if the law!